The Rule of Thirds

Photography is art. How can there be rules for art? A friend and fellow photographer says "rules are made to be broken". I'm pretty sure he's talking about photography rules, or at least I hope so.

There are several rules of composition that can help a photographer compose a photograph that is more interesting to the viewer. I have to agree with my friend and think of these as guidelines more than rules. 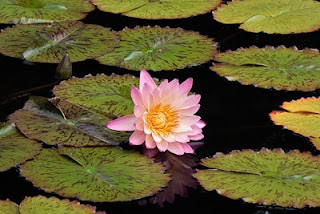 Perhaps the most useful photographic composition guideline is called The Rule of Thirds. Many photographers compose their shot to put the subject in the center of the photo like in the first photo to the right, which often produces a photo that's more of a snapshot. It has a static documentary feel to it. 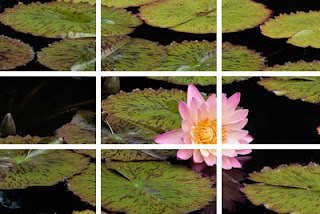 The Rule of Thirds involves dividing the photo up into 9 equal parts by drawing two equally spaced vertical and horizontal lines, like a tic-tac-toe board. You want to place the subject or dominant element of your photo near one of the four points where the lines intersect, like in the second photo on the left.
This photo could have been more interesting if I had placed the flower at one of the intersection points on the left instead of the right so that the flower is facing into the photo instead of out of it. This is one of those cases where I wish I could go back and try this shot again.
Sometimes your photo may have more than one main subject, in which case you might want to compose to use more than one intersection. 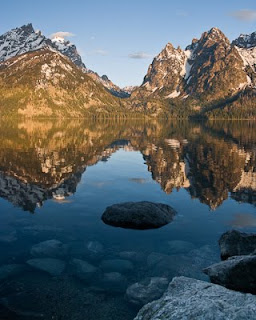 If your photo has a natural line that divides it you might want to arrange the photo to place that line along one of the horizontal or vertical lines. If you're taking a landscape shot, place the subject you want to emphasize either above the bottom line or below the top line. For example, in the third photo on the right, I composed the shot to place the far lake shore along the top line and emphasize the lake and the rocks in the foreground rather than the sky.
Many of today's camera have the rule of thirds grid displayed in the viewfinder or on the LCD display (some of you are saying to yourself "so that's what that's for!"). You may have to change the camera settings to turn it on.
If we all followed the "rules of photography" all our photos would look the same. Don't be constrained by this rule. Some of the most interesting photos out there break all the rules.
No comments: Links to this post