What Are You Thankful For?

"Now thank we all our God" is a Christian hymn written around 1636 by Martin Rinkart (1586–1649).  Rinkart was a Lutheran minister who came to Eilenburg, Saxony at the beginning of the Thirty years war. The walled city of Eilenberg became the refuge for political and military fugitives, but the result was overcrowding, deadly pestilence and famine.   During the height of a severe plague in 1637, Rinkart was the only surviving pastor, conducting as many as 50 funerals in a day.  He performed more than 4000 funerals in that year, including his wife's.

Rinkart wrote this hymn at the end of the Thir­ty Years’ War  for a grand cel­e­bra­tion ser­vice. 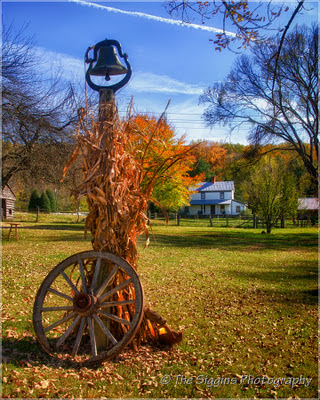 Now thank we all our God, with heart and hands and voices,
Who wondrous things has done, in Whom this world rejoices;
Who from our mothers’ arms has blessed us on our way
With countless gifts of love, and still is ours today.

O may this bounteous God through all our life be near us,
With ever joyful hearts and blessed peace to cheer us;
And keep us in His grace, and guide us when perplexed;
And free us from all ills, in this world and the next!

All praise and thanks to God the Father now be given;
The Son and Him Who reigns with Them in highest Heaven;
The one eternal God, whom earth and Heaven adore;
For thus it was, is now, and shall be evermore.

It is amazing that, af­ter such mis­e­ry, he was able to write this hymn of thanksgiving.

This time of year we are quick to tell others "Happy Thanksgiving" without giving much thought to what we are thankful for.  If Rinkart could thank God after such hardship you and I should be thanking Him continuously for all the blessings he has given us.

What are you thankful for?
No comments: Links to this post

I've just ordered the biggest print I've ever made

For some time I've wanted to create a large pano print to hang over the living room couch.  I have a framed print there now but it's just not big enough.   I'm talking about something about 4 feet wide!

To print something that large takes some preparation.   A single 18 Megapixel photo cropped down wouldn't have the printed resolution I was looking for.  I needed to take several images and stitch them together to create a wide pano.   I wanted a landscape scene that would look good with the colors in the couch.  I had made several attempts but never cared for what I got.  Either the light was not good, the colors didn't match, the scene was not great or the stitch didn't work.  On a recent photo workshop I had the conditions I was looking for.

I wanted to the pano to be wide enough to give me some flexibility for cropping to print.  I decided to make a series of 7 images.   In this case I was looking into a sunrise and the range of light was going to be more extreme than my digital camera sensor was going to be able to handle.  I needed to take three different exposures at each point in the arc to capture the full range of light so I could blend them together later using HDR software.   That meant I had to take 21 images!   The sun was coming up and the light was changing so I wouldn't get a lot of chances at this.   To make the stitch come out I set the camera exposure on manual, exposure bracketing -1EV, 0EV and +1EV, aperture at f/14, ISO at 100 and set to daylight white balance, removed the polarizer filter, and made sure the camera and tripod were level.  These are all things I learned the hard way on the other failed attempts.

When I got home I found I had what I had been hoping for.  I ran each set of three bracketed images through the Nik HDR Efex software to create seven new single HDR images using saved the settings so I could process each set exactly the same.   I then used Hugin pano stitching software to create a final image that was wide enough to fill 4 feet.  The end result could have gone up to 6 1/2 feet wide without having to scale up!

For printing I wanted to create a Triptych, which is three prints hung side by side.  In this case I wanted to create the appearance of looking out windows to a beautiful landscape.   Enter Groupon codes for 16x20 gallery wrapped canvas prints from Canvas on Demand (I'm getting hooked on Groupon).  I divided my photo into three 16x20 panels and placed my order.   It's going to be a while before I get my prints, but when hung on the wall the should look something like this

I'm real happy with the way this came out and can't wait to see the actual prints.  Check back in a few weeks for the end results.
1 comment: Links to this post

Are you ready for Winter?

It snowed in Kingsport Tennessee today!   The temps were still in the 40's so no one was worried about accumulation on the roads.  Snowing before Thanksgiving is a bit early for us but it does remind me that winter is not to far off.

Seems like just a couple weeks ago we were enjoying the fall colors.  Recently I put together a calendar with some of my favorite photos from the past year.  Here's the calendar page for November 2012. 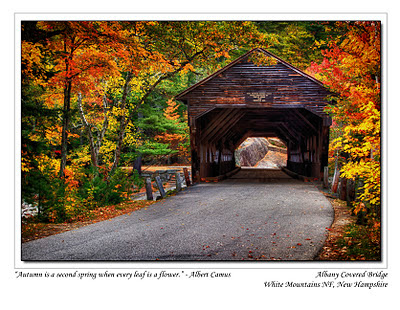 I really like the quote I found for this photo.   I can look at this photo and remember what autumn was like just a few weeks ago.  Fall just does not last long enough.

Right now we are in that in between time where the fall colors are gone and everything is either brown or grey.   In a few weeks we may have some snow accumulation, which can be a beautiful time to go out and enjoy God's gift of snow.   I can hardly wait.

If you are interested in buying a copy of my calendar you can send me an email at r.siggins@charter.net.   The calendars are $15 each and all the profit goes to Hope Haven Ministries of Kingsport.  You can see some of the photos used in the calendar by clicking here

I have been home for four weeks now since my trip to Nova Scotia, New Brunswick, Maine, New Hampshire and Vermont and I just now finished editing and posting my favorite photos from that trip.   People ask me how many photos I took and to be honest, I don't know.    I'm pretty aggressive when it comes to deleting images after I have loaded them on my computer.   This time I didn't count before I started deleting.   I will say it's the first time I used every memory card I have, which is quite a few.

The good news is I spent the four weeks narrowing down to 36 from New Brunswick and Nova Scotia and 59 from Maine, New Hampshire and Vermont.   Considering I was gone for 16 days and most of those were spent it a photography workshop, that's a really small number of photos.

I always shoot in RAW mode.  Unlike when shooting in JPEG format where the camera does a lot of automatic adjustments, shooting in RAW means every photo has to be edited.   I spent a lot of time on my edits trying to make them the best I can.

I didn't edit my photos in the same order I took them.  I worked on the most promising ones first and made my way down to the questionable photos last.  Most of the last ones I worked on got deleted.  The very last photo I edited did not look promising.  It was from a spot known for sunsets, but we got there too late for sunset.   There were no puffy clouds in the sky to catch the remaining sunset light and it was getting pretty dark.  Most of our group didn't bother to walk out to this spot.   Imaging my surprise when I came out with this image from that spot.

I took three exposures (1/5 second to 2.0 seconds) to capture the entire range of light and then blended them together using Nik HDR Efex Pro software.  I used Lightroom 3 to add the finishing touches.

This spot is a wide grass covered hill with views that go on forever.  The interesting thing is there is a mountain bike trail that runs through it.  You can see the path on the left side.  Nothing like the mountain bike trails here in Tennessee.

Take a look at all my photos from this trip by clicking these links.  Once the page loads click the slideshow button, sit back and enjoy.

A shot I enjoy getting is window reflections.   If I position my camera just right I can get some really cool subjects reflecting in the windows.   If the window happens to be in an old building with a lot of character then the window frame and walls can really focus attention on the reflections.   Here's three I've done.


I got the church on a recent photography workshop.  We chris-crossed across Maine, New Hampshire and Vermont so many times I lost track of exactly which state we were in.   It's in one of those three.

All three of these shots just happen to have been taken in the fall.   The Harper's Ferry shot was October 2010 and the other two were October 2011.   I like the texture of the walls in the first two and the horizontal lines in the last one.

A polarizing filter is not necessary for window reflections but it can be used to adjust how much reflection you want in the window.  In the Harper's Ferry photo I wanted to be able to see inside the building and see the reflections.  I adjusted the filter to get the balance I was looking for.  In the second two I wanted all the color and light I could get in the reflections.

If you try these shots, just make sure you watch for unwanted elements in the reflections, such as buildings, lights, people or even yourself!

The fall color is pretty close to gone for this year, but I'm going to enjoy these for a while longer.