Moving from Beginner to an Accomplished Photographer 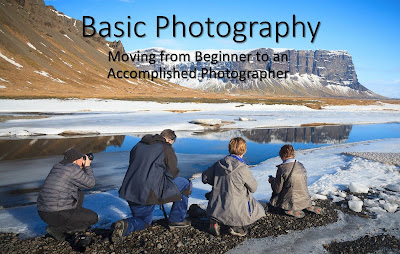 I don't normally teach the Basic Photography class in the summer but there are enough people on the waiting list to schedule an additional class.  The class will start out with learning the basics of photography - light, shutter speed, aperture and how to use them on your camera.  From there we will get into color, composition, lighting, techniques and photographic gear selection.  We'll talk about some common photography challenges and how to overcome them. We will go over different photo editing packages, organizing photos, printing, and sharing online.   The class will be a combination of classroom teaching, practicing our new photography skills, and reviews of photography assignments.

The class is designed for a photographer who has a DSLR, mirrorless camera, or advanced compact camera.

Classroom sessions are May 1, June 5, 7 and 12 from 6:00 PM– 8:00 PM in the Eastman Employee Center.   There will be one field trip on Saturday, June 9 to practice what we have learned.  The Saturday time will depend on what works best for the majority of the students.

In every Class we will have time for:


The class is open to Eastman Camera Club members.  The good news is anyone can join the club by going to http://eastmancameraclub.com/ and clicking on About near the upper left of the page.

Don't Be Satisfied With The First

Many landscape photographers, including myself, have a bad habit of shooting the first obvious composition.  That's fine, but the problem comes when we stop there and don't take the time to look for other different less-obvious compositions.

Here's an example from a recent trip to Charleston Falls Preserve in Ohio.  The falls are billed as a miniature Niagra Falls because of the rock strata.  When we were there the water flow was low and the falls were nothing like Niagra, miniature or not.  There is a nice footbridge that crosses the creek below the falls.  This bridge is the obvious place to shoot from and I made all these photos from that bridge.  The best thing I can say about this first photo is it accurately depicts the falls.  It's what I call a documentary photo - accurate, but uninteresting.

The nice footbridge was also a barrier to getting to where I would like to have shot the falls - standing in the water about 20 feet from the base of the falls.  I could have positioned my camera low near the surface of the water and used the flowing water as a nice leading line up to the falls.  The day was cold, rainy and muddy - not worth climbing over the railing.

When the water falls vertically, a portrait (tall) aspect composition will often work best when shooting waterfalls.  That's how I shot the first example.  It shows the entire falls and the pool below.   Another option is to zoom in to capture some of the details in the scene.   In the second photo, I stood closer and used a horizontal crop to emphasize the three places where the water hits the rocks.

There is still a lot more rocks than water in the second photo.  I think the water hitting the rocks is the much more interesting than the rocks.   By zooming in even more I can emphasize the white water on the rocks. I also put a polarizer filter on my lens for this third photo.  The polarizer cut some of the glare off the wet rocks.
My favorite part of this third photo is the flowing white water contrasting with the hard dark rocks.  The splashing water throws up a mist where it hits the rocks making it appear to glow.  Personally, I think this is a better composition than either of the first two.

When a photo is about contrast and shapes it can be a good candidate for black and white.  When you take away the color it can draw the viewers attention to other parts of the photo.  In this case that is the misty glowing water, the shapes or the water and rocks, and the contrast between the white water and the dark rocks.
All of these photos were taken from the short footbridge.  By moving to different positions on the bridge and trying different compositions I was able to find multiple compositions I would have missed if I had stopped with the first.  When you arrive at a photo location, take time to look around.  You might try leaving your tripod and walking around with just your camera looking for interesting shots.  You can always go back for the tripod when you find a composition you like.  Just don't be satisfied with the first.