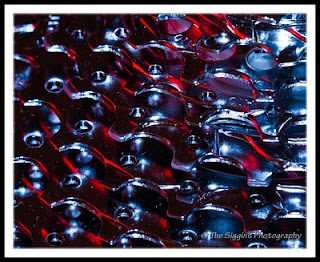 There is always something to shoot.   You don't have to have a perfect day or a perfect subject.  Sometimes ordinary items can become extraordinary subjects.  This is especially true in macro or close up photography.   Here's an example.

My son Tim ordered a new set of gears for his mountain bike.  When he opened the package and I saw the repeating pattern of silvery gears I said "I've got to shoot that!".   Fortunately for me, he was lacking a tool to replace the gears so I had an extra day to try out the gear photography. 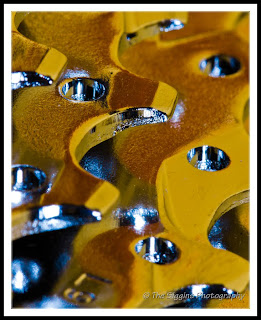 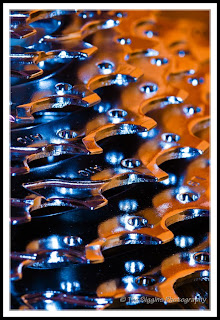 The gears themselves were interesting under normal light, but I thought adding some color would add some interest and make them eye catching.   I used the on camera flash and a second off-camera slave flash to light the gears.  I then used colored tissue paper over the flashes to add the reds, blues, and yellows.  I also used a yellow envelope behind the gears to give a stronger yellow reflection. 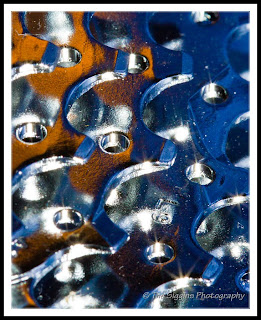 I was shooting in manual mode on the camera and adjusted the on-camera flash output depending on the tissue paper and where the other flash was positioned.   I moved the off-camera flash around to produce different lighting effects.

I'm normally outside shooting landscapes or nature so it's a little out of the ordinary for me to shoot still life or abstract photos.  It was fun to try something new.  And I didn't need a fancy studio or a particularly special subject for this.  Just goes to show, you can find something to shoot anywhere. 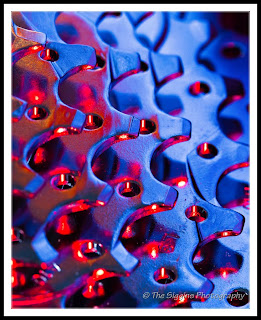 It's been two months and I've still not gotten around to posting my photos from Sequoia, Yosemite, and Kings Canyon National Parks.   There are so many I've not figured out how I want to share these.  So far I've shared photos from Bodie California and the Wildflowers of Sequoia and Yosemite, which you can find in previous blog entries.

One thing I tried to look for and pay attention to on this trip was contrasts.   There are lots of different kinds of contrast in the world of nature photography.   Some contrast is to be avoided, such as when the difference between the brightest and darkest parts of the scene are too extreme for the camera to handle.  Having contrasting colors in a photo, such as red/green or blue/yellow, can really make an image.  Sometimes you can add interest to a photo by including contrasting subjects, such as large/small, fast/slow, or immobile/moving.

Here are some images from the the parks in Sierra Nevada where I tried to make use of different kinds of contrast. 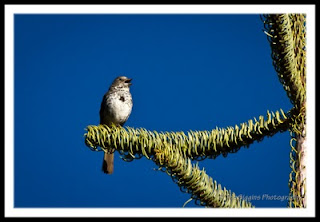 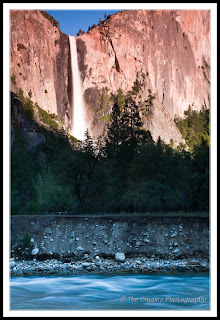 The first two photos are examples of color contrasts.   The evergreen branch contrasts with the vivid blue sky in the background.   The light colored bird and the darker background also add tonal contrast to the image without exceeding the camera's ability to capture the range of light.   The second picture has layers of contrasting colors - cool blue in the river, green of the trees, and the warm pink-orange color of Bridalveil Falls and the cliff face at sunset. 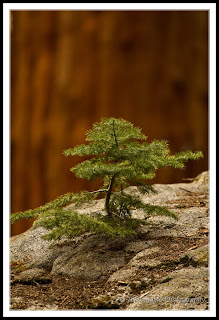 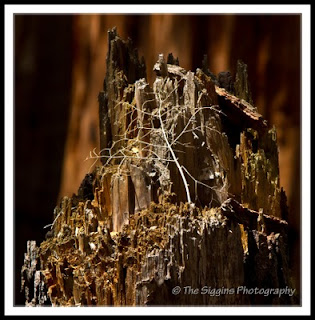 The second pair of images show contrasts in size.  The small evergreen in the foreground and the Giant Sequoia in the background tell a story of growth.   One day that sapling may be one of the largest trees on earth like the one behind it.   The Giant Sequoias can live to be over 2,000 years old so it may take some time.  The second image shows a small dead twig on a large dead stump (no, I didn't place it there).  This also has a Giant Sequoia in the background as well.   Because they are so big and there were so many I had lot of opportunities to use them as backgrounds.

This photo shows both death and new life in one image.  The dead tree stump is the remains from a forest fire that destroyed much of an area of Yosemite several years ago.  Without the tree canopy to block the sun the Lupines are thriving and spreading new life across the hillside. 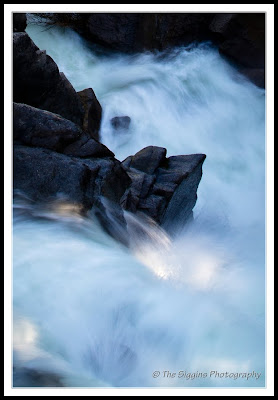 This final image show the immobile solid rock surrounded by the flowing water of a stream.   The rock is sharp and in focus, while the water is smooth and blurry, adding an interesting contrast to the image.
I'm going to continue to post images from our trip in June.  Be sure to come back or better yet subscribe for email updates .
1 comment:

Wildflowers of Sequoia and Yosemite 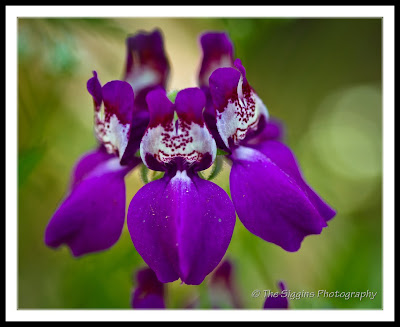 It's been about 6 weeks since June and I got back from our trip to Sequoia and Yosemite National Parks and I'm still working through the images from that trip.  There was such a variety of things to see and photograph in those two parks, plus Bodie and Mono Lake that I've been overwhelmed.   I shared some photos from that trip at work today, which motivated me to get busy and start publishing some of the photos. 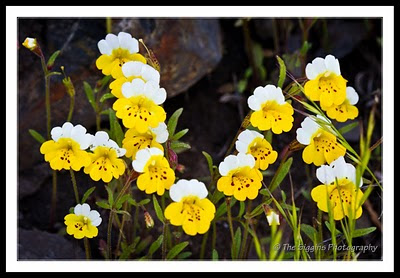 We were surprised by the number and variety of wildflowers that were in bloom in mid-June.   It was exciting to see many flowers that we don't have in the east.   It's also a challenge to identify them without a good wildflower book for the Sierra Mountain area of California.   I have published 26 photos in my Photo Gallery under Nature, Sierra Wildflowers   I've been able to identify several of them, but not all.   If you can help me identify others please drop me a note and give me a hint.  I'm especially curious about the yellow and white flowers on the left.  They almost look like someone hand painted them with a white top half and a yellow bottom half.

Since I've started photographing nature, and especially wildflowers, June and I have both been amazed and the beauty and detail we have been missing all these years.   A few years ago we would have walked past these and said something like "those are nice", without really looking at them or remembering them later.  Now we stop and look closely at God's creation.   Like these Yawning Penstemon (I think that's what they are). 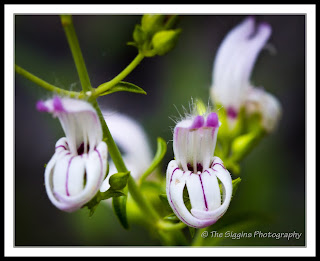 When you get up and look at them they look like they have folded arms and are balding on top.  Some flowers are very tiny and you have to get right up on them to appreciate them.
I have to share this last photo with you.   Isn't it beautiful and isn't it a great photo of a wildflower?  June took this while patiently waiting on me to finish up shooting something else close by.  I'm very proud of her photo.   It's even more impressive because she took it with a Canon Powershot compact digital camera. 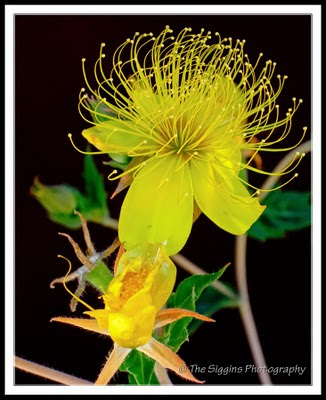 I hope you can appreciate what God has done with these little beauties when you explore the Sierra Wildflowers Gallery.
No comments:

Every year Kingsport Tennessee puts on a 9 day celebration called Fun Fest.  One of the highlights of Fun Fest is the Hot Air Balloons on the second weekend.  The big balloon event is Saturday morning but this year I was in Jonesborough leading the Photowalk and couldn't make it to the Fun Fest Balloon Race.  I did get out Friday night for the Balloon Glow.   Several hot air balloons are set up outside the stadium where the concerts are going on.  They fill them with air and light them up like giant multi-colored light bulbs! 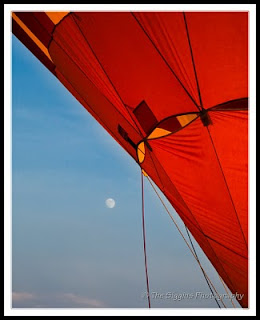 The location is full of power lines, street lights, buildings and other distracting objects making photographing the balloons a challenge.  This year we had cloudless skies and a full moon so I decided to see what I could do with the moon and balloons.
The first shot was taken just before sunset when the sky was still blue.  I liked the contrast between the orange balloon and the blue sky.  In hindsight I think I might have done better with a long telephoto lens from a ways back instead of my short lens up next to the balloon.  That might have made the moon look much larger in the photo. 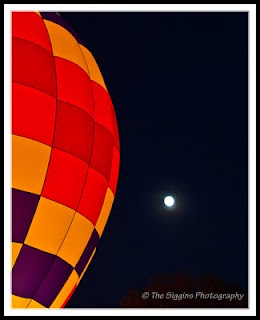 The second shot was later after the sun had gone down and the sky was dark.   Getting the balloon exposed correctly meant over exposing the moon.  As a result there are no details on moon and it just looks like a white dot. 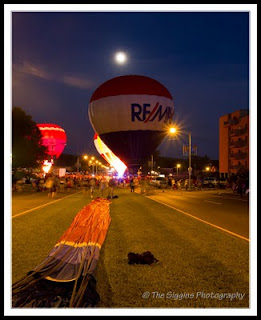 The last two shots include the street, street lights, buildings and some of the thousands of people that were down there.   The balloon in the foreground in the third shot had just been taken down and was in the process of being folded up.
Shooting the balloons required some timing.  They are very bright when they are being lit, which can result in a very over exposed subject, like the balloon behind the Remax balloon in the third shot.  I found it was sometimes easier if I waited until a nearby balloon was lit, which illuminated the other balloons with a soft light, like in the last photo.  A relatively small aperture (f/10) created the star burst effect on the street lights.   I was using an ISO of 800 and even at that, the photos were around 1 - 2 seconds long. 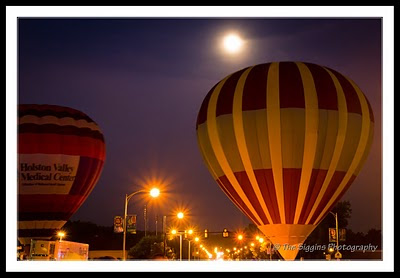 This was a fun event to photograph.  If you go, bring your tripod, a remote shutter release, and a couple different lenses.
No comments: