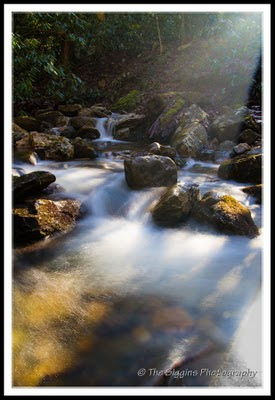 How many times have we heard, or said to our kids, "Rise and Shine!", usually followed by something like "sleepy head".   June and I went to church Saturday night so we could rise on Sunday and go to Rock Creek Park near Erwin TN for a little hiking.   Our goal was Rock Creek Falls.   We didn't make it to the falls because the creek was too high to rock hop across and the thought of falling in that icy water was not very appealing.
We decided to hike the Rattlesnake Ridge trail instead and came across this little creek beside the trail.  In fact, we had to cross this creek several times, but this time the water wasn't too high to cross.   On the way back we stopped off to explore this creek a little bit.
I was shooting almost into the low winter sun but with the mist in the air I got a pretty cool spot light effect where the sun was shining through the trees on to the creek.   What you don't see here is June holding her hat out over the creek the shade the lens.
We came away with several nice photos from our day at Rock Creek Park and I'll post those soon.
"Arise, shine, for your light has come, and the glory of the LORD rises upon you."  -  Isaiah 60:1
No comments: Links to this post

Three Out of Four Seasons

Back in Spring of 2009 I went on a photo workshop in the Great Smoky Mountains National Park.  Just about every spring workshop in the park makes a stop at the Middle Prong of the Little River near Tremont.  It's easily accessible and one of the most beautiful sections of the park.   When our group made this stop I got a number of shots, including this one.
I was pretty happy with this shot and it now hangs in a break room at work.
When June and I went on a late summer trip to the Smokies last year we spent some time along the same section of the river and I ended up finding the same spot and getting a very similar shot.

This last weekend we were in Pigeon Forge for Wilderness Wildlife Week.  When we got up Saturday morning it was snowing and we decided to skip the workshops and head into the park to enjoy the snow.  All the roads in the park were closed, except the road along the Middle Prong of The Little River.   We got in and were able to spend about an hour and a half back along the river.   It was snowing like crazy and there was about 3 additional inches of new snow by the time we left.

Even with all the snow I was able to find the same spot where I took the other two photos.  Now I'm thinking it would be cool to have shots of the same section of the river in all four seasons so I tried to get as close to the other photos as possible.   Not easy since I didn't remember exactly what the others looked like.

Here's my winter shot of the same scene.

As we were leaving we got to a gate just as it was being closed and locked.  The road conditions had deteriorated enough that they were now closing the last open road.   We were able to get out and told the guy locking the gate that there were several other cars back along the rivers.   He said they will just have to wait until someone came back to let them out!   We were glad to get out when we did.   Five more minutes and we would have been locked in.

I now have three out of the four seasons.  Once I get a fall shot I'll print and frame all four to hang at home.   I'm looking forward to seeing how that comes out.  I only have to wait 9 more months!
No comments: Links to this post