What Makes A Good Photographer?

On October 11 there were photographers of all skill levels with all kinds of photo gear wandering the streets of Jonesborough Tennessee for the Scott Kelby Worldwide Photowalk.
There were Nikons, Canons, Sonys and other brands represented.  Some of these were pretty nice cameras.  There were also many excellent photographers.

The photo below is not mine.  It was taken on the photowalk in Jonesborough by one of the photographers/walkers in the photo above.  Each of the photographers who participated in the walk could pick their favorite photo and submit it to be judged against all the other favorites from that day.  The photographer with the best photo won a full year membership to Kelby One online training (a $249.00 value). That's a pretty nice prize.  As the walk leader I had to choose what I thought was the best photo of the day.  This is never an easy task because they are all good and each one is different.  This year I picked a red leaf in water as the best photo.

So what makes this a good photo?  Of course, there is a lot of subjectivity in picking a photo.   What I like may not do anything for you.  The thing is, photography is art and everyone has different things they like and appreciate in art.  Here's some things I thought this one had going for it.

Color and color contrast - red is a powerful color and one that people's eyes are naturally attracted to.  This photo has a strong dominate red but also has a slightly blue tint in the background, creating a nice color contrast between the red and blue.

Angle - the fact that the photographer thought to angle the camera so the leaf points at an angle makes this a more dynamic photo.  If the leaf had been vertical, horizontal or placed in the center of the frame it would have felt static and uninteresting.

No distracting elements - simple, just a leaf in water.  There are no other things, such as twigs or other leafs, in the photo.   Generally the simpler the photo the better.

Sharpness - the eye is drawn to the sharp parts of a photo and the part of the leaf that is out of the water is nice and sharp.  You can see the interesting texture in that part of the leaf.  That part of the leaf is also placed at one of the power point intersections created by dividing the photo into three vertical and horizontal sections (rule of thirds).

Besides the composition of this photo, I like the fact that the photographer found this.  An eye for seeing photos before taking them is a skill that not everyone has.   My wife June has a good eye for photos, which is why my photos are always better when she comes along with me.

Some of you may be thinking that this is not a perfect photo, and you're right.   The top of the leaf was cut off and there is a circular shadow in the top, maybe from the photographer.  The thing is there is no perfect photo.  In my opinion, this is a very good photo.   I wish I had taken it.

So a good photo is made by a photographer with a good eye who can create an interesting composition.  What about photo gear?   What kind of camera was used?   In photography circles there is always some friendly jabs between the Canon and Nikon shooters.  Lately, there have been some Sony and Fuji shooters showing up to claim the top gear of the year/month/day award.   What about this one?

Because of the info embedded in the digital photo I was able to look up some interesting facts about the photo.  It was taken with a shutter speed of 1/145 second, at ISO of 50, and an f-stop of 2.2.  This was taken with a 13 mega pixel model SCH-1545 digital camera.  Not familiar with that one?  Click here for info on the camera.  That's right, it was taken with a cell phone!

Now, I'm not suggesting we all go out and trade our cameras in on cell phones.  I am saying the most important piece of photography gear you can have is not the hardware you hold up to your eye.  It's what's behind your eyes that makes a good photographer.   Photography is all about light, seeing, and knowing how to compose a photo in such a way that it is pleasing to view.  The good news is you can easily upgrade your photographic mind by taking classes, workshops, online training or just hanging out with other photographers.   Being with other photographers and practicing are the two best investments you can make.
1 comment:

Today I took a hike down along the trails in the Deep Creek area of the Smokies with a good friend and Best Man from our wedding .   It's a place I've only been one other time and the first time I've been there in the fall.   The colors in the southern Smokies around Bryson City, NC were more muted and a little behind where they are on the north and western slopes this year.

As you can see from the photo of Tom Branch Falls, there was still a lot of green in the trees.  We didn't see a lot of golds or reds.  A few more cold nights and sunny days are sure to bring out those colors.

Even when we don't get the colors, light, or other conditions we are hoping for, there are always other ways to manipulate the photo.

The Park Service has built a nice bridge right next to Juney Whank Falls that allows the hiker or photographer to get close to the falls.  The yellow and red leaves stuck to the rock face caught my attention. Instead of taking a picture of the entire falls, I chose to zoom in on a small section with those leaves and some white water.  I think this photo has an autumn feel with the little color that there is.


Another opportunity to manipulate the mood through composition is the picture of this small rock in a stream.
I got this color by getting down low on the edge of the creek and getting in the right position to get the reflections I wanted.  In this case the reflections in the stream were of trees on the opposite bank that were lit by the early morning sunlight, giving it a golden tint.

No need to manipulate a photo in software.  You can change the story the photo tells by paying trying compositions that are different from the obvious, getting the right angle, paying attention to the light and getting a bit creative.

Trust in the LORD with all your heart.

The photo for October on my 2014 calendar is from Unaka Mountain Road in the Cherokee National Forest and Unicoi County in Tennessee.  This 12 mile long road windes its way over and around the mountain.   According to Encylopedia Briticanica the Cherokee Indians named the mountains Unaka (“White”), probably in reference to a persistent white haze or to some white rock formations. 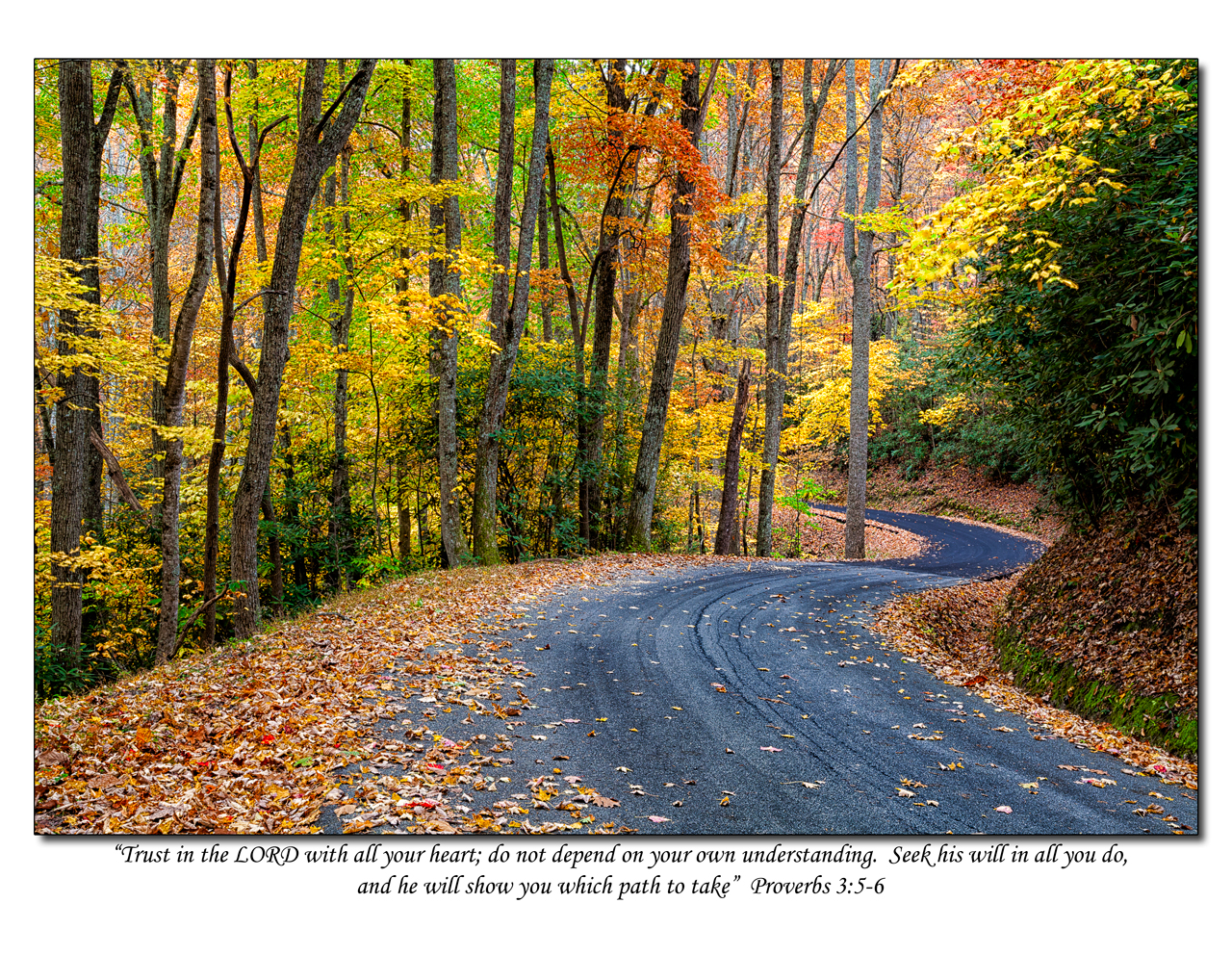 On this day the colors were anything but white.   Fall was ablaze with warm yellows, oranges, and red interspersed with some green leaves trying to hang on for a few more days.  You can tell by the leaves on the road that the fall days were growing short and soon the mountain would again be white with the first snows of winter.

I used one of the most powerful shapes in my composition.  The s-curve is a great graphic element that adds interest and pulls the viewer into the photo.  In this case I had the road start in a corner and avoided putting it dead center in my photo, which is a sure way to create a photographic dud in landscape photography.   One thing I wish I had tried was to climb on top of the car, which would give me a better view of the s-curve.  I always come up with great ideas for improving a photo long after I took it.  I guess that's the way I learn.  It sure takes a long time that way.


The small photo on the calendar page was taken just a few miles from our house at Exchange Place.   It is a great place to wander around and shoot, particularly in the fall.  On this day I had to place to myself and spent a couple hours wandering around and poking my head in any open building looking for a photo that would tell the story of Exchange Place in the Fall.

Once you're on Unaka Mountain Road you have very few decisions to make.  There are only a handful of short side roads, but they all lead to dead ends.  You either have to continue to the end or turn around and go back.  It makes navigating the mountain easy.

Life is not always so simple.  Every day we are faced with multiple decisions that have to be made.  Some are small, yet others are significant and can have a major life impact.  We find ourselves struggling to gather information, study all the angles, and make our decision.   That's the hard way.  If we listen to Solomon's wisdom, don't try to figure it all out on our own, but trust the Lord  he will show us which path to take.   We don't have to know it all.  We have someone on our side who already knows it all and will show us the way to go.  All we have to do is listen and trust.

It's time to be thinking about a calendar for 2015.  I've place an order for the first batch of 2015 calendars.  If you want one just drop me an email to r.siggins@charter.net.   They're only $15, all the profit goes to Hope Haven Ministries, and I'll even ship to you.
No comments: