Be sure to check out some of my favorite websites

You'll find listed there a few photographers I admire.  Some I know personally, others I just know from their photography.   All are excellent and inspire me to improve my photography every time I go out.   At the bottom of that list is a link labeled The Worlds Greatest Landscape Photographers.   This is a larger list put together by David Herreman in Belgium.  If I attempted to make such a list it would be very similar to David's.  If you are a landscape shooter or just enjoy looking at outstanding landscape photographs, check out David's list.  If you click on the thumbnail picture you will go to that photographer's website. 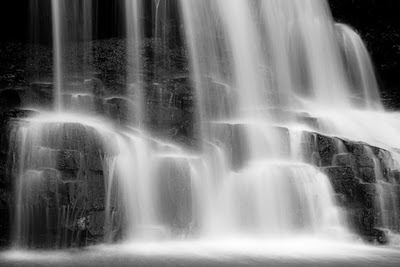 Many of these photographers are on Google+ and clicking the G+ will take you to their Google+ page.   I don't know what will happen if you're not a Google+ user.   Maybe you can see the pages, maybe not.   If you're a photographer and not on Google+ then you're missing out.   Go sign up and start adding other photographers to your circles.   It's an amazing online community.

The photo is Laurel Run Falls in Hawkins County, TN.

Back in November 2009, June, her brother Jerry, and I went to Fall Creek Falls for a couple days.   We weren't there for photography but of course I had my camera and went out early one morning for sunrise over the lake.  There weren't many clouds in the sky that day but there was a nice fog around the lake which made for some nice soft scenes.  It took several photos, edited some when we got home, then didn't do any more with them.   They were forgotten until I was looking for something else and rediscovered these photos.

There was one photo I decided to see what I could do with over two years later.   Would it be better?  Worse?  Would it come out the same?   My experience tells me any of these outcomes were possible.  I've decided to share what I did and let you decide.

Here's the original "as shot" image, straight out of the camera. 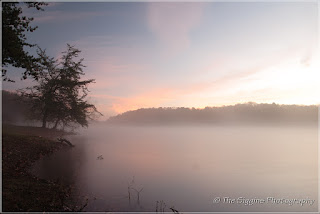 You can click on any of these photos to get a larger view.

The sky was over exposed on the right side.  The cloudy white balance gave it a nice warm feel but the blues in the sky were almost unnoticeable.  The camera was slightly tilted to the right.  Other than that, not a bad shot. 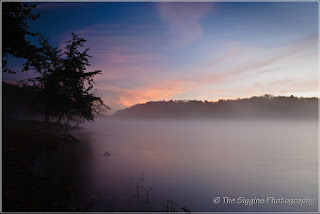 This is a much more interesting photo than what came out of the camera.   That's where I left it back in 2009.

This time I decided to start back with the raw image as before and use some of the Nik software filters in addition to Lightroom.

I decided the right side was not the most interesting area of the photo and cropped it to a vertical format, removing most of the right side.  In addition to the tree there is an interesting curving path along the lake shore that you just don't see in the version above.  I want to bring that out to add the s-curve to the composition.   I could use the Lightroom tone curve or fill light slider to lighten the dark areas, but I've found the Detail Enhancer filter in Nik Color Efex pro to do a great job bringing the details out of dark areas.

Before editing in Color Efex 4, I first ran the image through the Nik Define 2.0 to remove any noise.  It's always a good idea to do this first because many adjustments can magnify noise (static) in a digital photo.  Here's the cropped photo after removing noise. 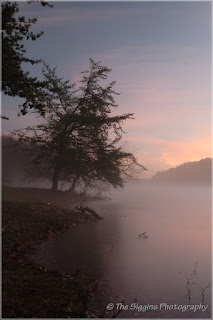 I then opened the photo in Nik Color Efex 4.   Applying the Detail Enhancer filter to the entire image really messed with the soft fog, water and skies.   I used control points (which is the coolest part of the Nik software) to only pull out the details in the shoreline and a little in the trees.   The Brilliance/Warmth filter and the Skylight filter added a little saturation to the orange clouds and blue sky bringing back the colors of sunrise that were lost in the original as-shot photo.

Another cool artistic Nik filter is Glamor Glow.  Sounds like something designed for portraits, but it can  be very effective at creating a moody feel in a landscape photo like this one to emphasize the fog on the lake.  Again I used some control points to not add glow to the shore line or the tree in the upper left so I wouldn't lose those details.

Finally, I used the Darken/Lighten Center to add a nice vignette around the outside, drawing the viewers attention to the tree in the center.  One thing this filter allows me to do that I can't do in Lightroom is place the center of that vignette.  By placing the center to the left side I was able to emphasize the shore line, leading the viewers eyes up to the tree.  Here's a side by side view of the photo before editing in Color Efex and after. 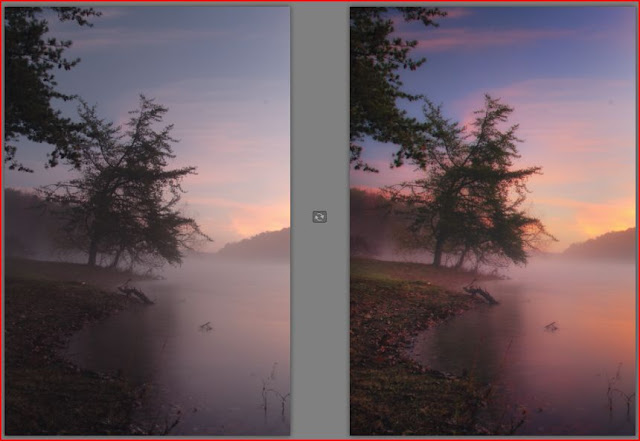 When I brought the photo back in Lightroom I noticed a few dust spots in the sky that needed to be cloned out and some weeds at the bottom of the photo that were a little distracting.  I used Photoshop Elements to close out the dust spots and weeds. 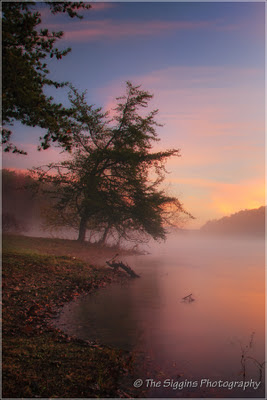 Is this version better than what I did in 2009 or just different?  You'll have to decide for yourself.  I kind of like it.  In fact, I may print it to hang at home or at work.  This photo is available for purchase online here.

If you're not a photographer you may not find any of this of interest.  I hope you at least enjoy the photos.  If you found this of interest and want to learn more about Lightroom or Nik software let me know.

It's kind of fun to look back over the past year and go through photos that I've taken.  It's like remembering a lot of great times with my favorite people.  I just went through all my 2011 photos that I had posted in my gallery and picked 10.   I didn't agonize over the selections so it only took about 15 minutes to create a new gallery called Top 10 of 2011.

Some things I found interesting and maybe a bit surprising when I got down to 10:
I hope you enjoy these ten.  Drop me a note and tell me what you think.