When we visited Washington and Oregon we went in search of landscape and nature photographic subjects.  We found those in abundance but we also enjoyed visiting several of the historic sites along the southern Washington and northern Oregon coasts.

Fort Nisqually in Point Defiance Parkthe first European settlement on Puget Sound, was a bustling center of trade that expanded into a large-scale agricultural enterprise. is a great place to spend a couple hours.  Experience life in Washington Territory during the fur trade era.

The Peter Iredale is the wreck of a fort masted ship that ran ashore in 1906.  Today all that's left is the rusting steel ribs like an ancient beast.

There are numerous lighthouses along the coast, most are easily accessible.

We only scratched the surface.  You could spend days exploring the historic sites in this area.

These photos and many more are available on line on The Siggins Photography website Check them out and let me know what you think.

Life On The Rocks - Common Murres

I'm not a fan of the beach (just ask my family) but the coast of Washington and Oregon is very different from what we are used to on the coast of Florida and the Carolinas. The Pacific Northwest coast has numerous coves, bays, rocky coast lines, and even waterfalls.   One feature I found interesting is the sea stacks, which are blocks of erosion-resistant rock isolated from the land by sea. Sea stacks begin as part of a headland or sea cliff. Relentless pounding by waves erodes the softer, weaker parts of a rock first, leaving harder, more resistant rock behind.


Three Arch Rock is an example of a Sea Stack about 1/2 mile off the Oregon shore near Oceanside where we spent a couple nights.  Another example is Pillar Rock off shore of the Cape Meares National Wildlife Refuge.  We could get closer to this rock and get a good look at the residents of this inhospitable place.

Common Murres are penguin-like birds that live in the cooler northern oceans.   Common Murres nest on the tops of these sea stacks in colonies so dense that there may be 20 nesting pairs in one square meter.


Common Murre eggs are pointed at one end; when pushed, they roll around in a circle, preventing them from rolling off into the ocean. The variation in egg color and markings allows parent Murres to recognize their own eggs when they return from sea.

These birds are abundant along the coast, which makes them easy targets of eagles.   We talked with some birders at Cape Meares and learned that eagles will swoop down and grab a baby or even adult right off the rock.  Sometimes they will land just a few feet away to eat their meal right in front of the other birds.

Later that day we were down at Yaquina Head Natural Area in Oregon when we heard Sea Gulls making a racket and chasing a young Bald Eagle.  You can see this eagle has a Common Murre in it's talons and blood and feathers on his beak. 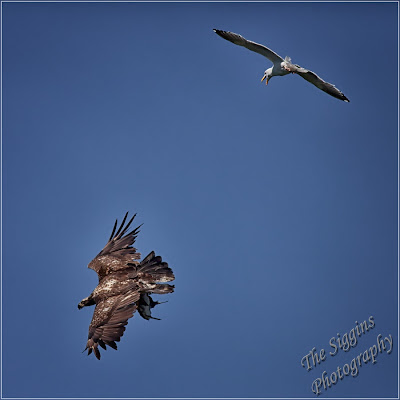 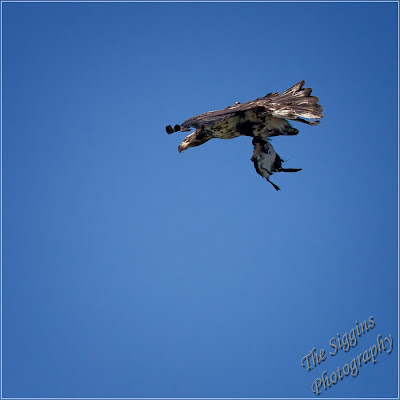 The surprising thing is it was the Sea Gulls that were harassing the Eagle.

Life is pretty rough on the rocks.

If you're interested in seeing more photos from our trip to Washington and Oregon and hearing more about the photography, join me at the Twin City Photo Club in Bristol Tuesday September 3.  I'll be doing a program using photos from this trip.

Don't worry, I'm not talking about a background check where your skeletons are dug up and shared with your perspective employer.   I'm talking about the background in your photo compositions.

When composing a shot it's easy to focus all your attention on the subject and let your mind tune out the distracting elements in the composition.    Unfortunately, those distracting elements will be very noticeable when you get home and bring the photo up on a computer.   Those things you never noticed can ruin a photo.

Here's a recent example.  My dad grows Orchids as a hobby.  While visiting this last week I took a few minutes to go into the yard to see what I could find to shoot.  This bloom was particularly pretty, but a good spot for an Orchid to grow is a bad spot to photograph it.  There was a wooden fence and the bright wall of a neighbor's house behind it as you can see here. 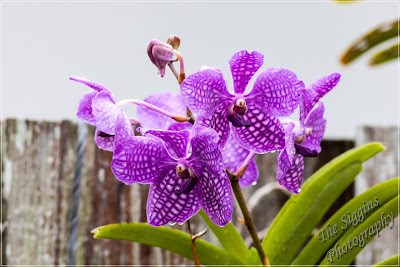 I was shooting with a 300mm telephoto lens that I stopped down to f/4 to minimize the depth of field and blur the background as much as possible.  In this case the flower and the fence were too close together to blur the fence enough.   The solution was to get low and shoot up at the flower.  By doing this I was able to take the fence out of the picture and just have the neighbor's house in the background.  The house was much brighter than the flower so I exposed for the flower, which made the wall appear to be solid white, which is a pretty nice background in this case. 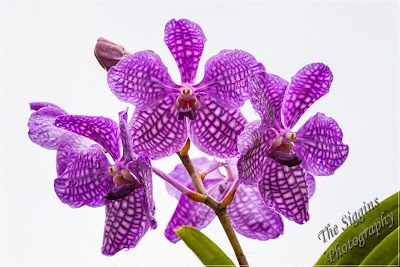 I think the second shot is a more pleasing composition.  Anyone looking at it will look at the flower and not be distracted by the background.

The background is not the only thing to watch out for when composing your shot.  Watch of objects that stick into the photo from the bottom, top or sides that can be distracting.  In the shot below the railing for the bridge I was standing on was included in the lower left corner. 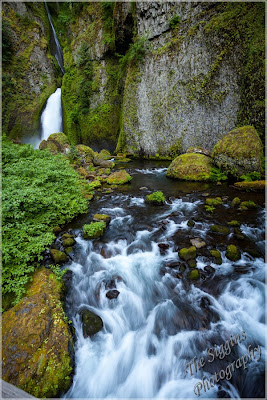 In the last example a cut log is showing up in the bottom of the photo.   It was actually the remains of an old bridge but does not seem to fit in the forest scene and should be eliminated.  Sometimes you can eliminate a distracting element by picking it up and moving it.  Other times, you have to move yourself and recompose to eliminate the distractions 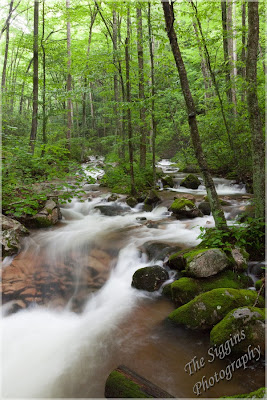 The best thing to do when composing is to slow down and look.  Move around and see what other compositions you can come up with. Finally, watch out for the background and other things that can distract from the main subject.

“You have brains in your head. You have feet in your shoes. You can steer yourself any direction you choose. You're on your own. And you know what you know. And YOU are the one who'll decide where to go...”
― Dr. Seuss, Oh, the Places You'll Go!
The sage wisdom of Dr. Seuss can be applied to outdoor photographers.   We will go places and do things that may seem absurd to most people.  We go in directions that normal people would just shake their heads in wonder if we really "have brains in our head". While on vacation, June and I will get up an hour or two before sunrise, stay out until well after sunset and go hard all day long.   When doing that in the Pacific Northwest in June sunrise is before 5 AM and sunset is after 9 PM, which makes for a very long day.  Between those hours an outdoor photographer will spend hours in one spot sometimes photographing the same subject and other times just sitting and waiting for the light to change.  These extended times in one place can be separated by a mad dash to get to the next spot at just the right time.  On an easy day we might go back to the hotel and sleep for a couple hours in the middle of the day.  After a couple days of this we might take our nap just about anywhere like my friend Chuck Barnes.
I am blessed to have a wife who is willing to put up with my craziness.  Not everyone is as lucky as I am.
When we get to the places we have decided to go that day we may do things that make people wonder what made us "decide where to go".  One example of our craziness is what I consider the best way to photograph a waterfall -- standing in the creek or river below the falls, often with the camera a few inches off the surface of the water.  Sometimes this water is spring snow melt, making it not too many degrees above freezing.   By getting to places at the right time and getting into the best place for a shot we can come away with interesting compositions, such as this one of Bridal Veil Falls in the Columbia River Gorge.

I took this at the end of the day when we were both pretty tired but the light was good for shooting waterfalls so off we went.

Earlier in the afternoon we had seen this guy taking photos at Munra Falls.  We ran into him at Bridal Veil Falls as well.  He was younger and had more energy than I had left and was climbing over boulders and through the stream to get the best shot.

I'm hoping to hike to some falls in Virginia  this Thursday morning with a photographer friend.   If we're lucky, it will be foggy and raining.  The best conditions for taking photos of waterfalls, streams and forests.   Oh the places we will go!