Creative Use of Shutter Speed and Long-Exposures

There are a couple camera settings that can be creatively manipulated to make your photos more interesting.  The lens aperture (the opening that lets light in) controls how much of the scene is in focus or the Depth of Field (DOF). The shutter speed (how long the lens is open letting light in) controls how moving subjects are captured.  Playing around with the shutter speed when photographing lakes, ocean shores, etc. can be fun and produce some very different looks.
To illustrate I have taken the same photo and different shutter speeds.  Take a look at these two.
The first photo had a shutter speed of 1/17 of a second, which captured the light chop on the surface.  The second photo had a long shutter speed of 14 seconds and turned that light chop into a milky surface.  Everything else in the photo was not moving and looks pretty much the same.
Here's another example.

You may have noticed that the ISO and aperture are also different in each photo.  I changed these settings to get the shutter speed I wanted.  The lower the ISO number, the longer the shutter speed to get the same exposure.  The higher the f-stop number, the longer the shutter speed.  If I want t long shutter speed I will start by setting the ISO as low as it can go (160 on my camera).  I will then change the aperture until I have a shutter speed I think will give the effect I'm wanting.  Because the aperture controls the DOF, I will make sure it is such that I have the DOF I want.
It's hard to see in the example above but the clouds in the 1-second exposure are slightly blurred because they are moving. When the shutter speed is very long and the clouds are moving across the sky you can blur them as well in your photo.
In both photos, you can see the clouds were moving from left to right.  You can make a very dramatic photo if you can position yourself so that the clouds are moving toward your camera.
Anything that is not moving in these long exposure photos will be captured sharp with no motion blur.  Sometimes even water is still enough that the reflections are crystal clear. 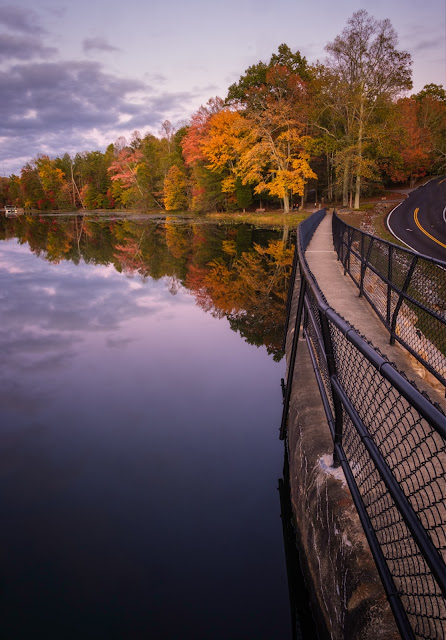 f
/22, ISO 250, 7 seconds
Long exposure photography can be a lot of fun.  Grab your camera, put it on the tripod, and give it a try.  Then let me know how it comes out.
No comments:

Breaking Out The Creative Juices

June and I have been in a dry spell where we didn't get out to photograph much at all beyond what can be found in our yard.  Last night we tossed the cameras and tripods in the car and headed to the mountains to see what we could find to photograph around sunset.  It was a great evening where the juices started to flow again.
When we drove through Johnson City and the way to Unicoi the temperature was 88 degrees.  By the time we reached Beauty Spot on Unaka Mountain, the temps had dropped to 73!  Much nicer!!  When we arrived we discovered more cars than I had ever seen up there.  There were many people enjoying the cool mountain air and spectacular mountain views.  Most appeared to be college-age and I think we were the oldest by about 30+ years.  No worries.  We picked our spot and waited for the show to begin.
When we think about sunsets we hope for a beautiful scene like June's photo above.  I'm proud of her photo.  It was the first one I posted after getting home around 10:30.  But there are many ways to photograph a sunset.
One way to change it up is to shoot wider.
Maybe use that same wide-angle lens to emphasize the foreground while including the sunset in the background. 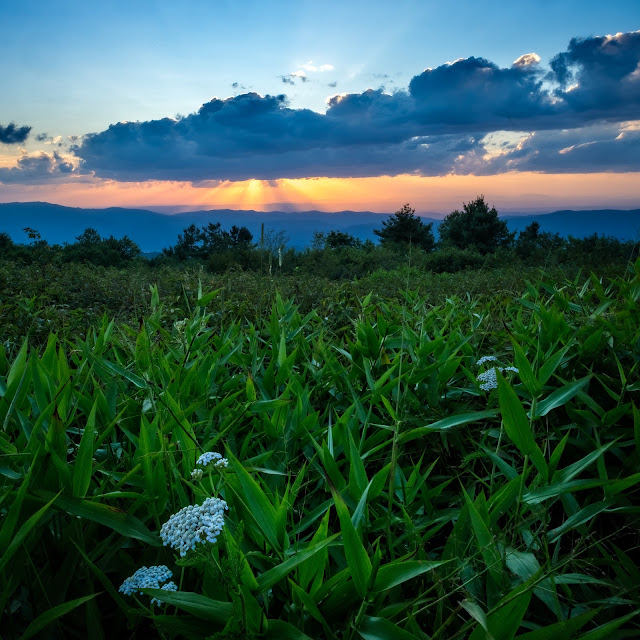 Maybe swapping out the lens for a telephoto zoom to include just part of the sunset.

By swapping to a longer telephoto zoom lens I can zoom in on just parts of the sunset.

Too often we shoot from the same spot using the same lens and the same focal length.  Don't let this habit squash your creativity. These photos are just an example of how changing the lens and focal length can result in vastly different photos of the same subject.