Something Different From The Solar Eclipse


Like millions of others, June and I took a couple days and traveled to watch and hopefully photograph the total solar eclipse on August 20. By now you've seen dozens of photos from that day and they all pretty much look the same. Here's my story and some different photos from Total Solar Eclipse Day.

I planned for a couple months leading up to the eclipse day.   I picked my location and booked one of the last hotel rooms in Townsend Tennessee months before.  I wanted to be close so we could get there early to claim our spot.  I ordered eclipse
glasses and a solar filter for my camera.  I even wrote a 10-page document with details on times, locations, angles of the sun, camera settings, diagrams, etc.  I consulted with Kent Ervin, one of the best photographers I know, comparing plans, etc. I was ready.

June and I spent the day before Eclipse Day in the Smokies, including some time under "The Tree" in Cades Cove where I planned on making my photos.

On the big day, we got up and left our hotel around 6 AM, more than seven hours before the start of the eclipse.  At 6:30, two miles from the entrance to Cades Cove we found ourselves in a line of cars with license plate from all over the east. 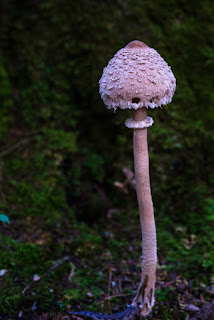 We were there in line for almost 2 hours. I don't know but wouldn't be surprised if that line of cars went all the way back to Townsend. Everyone was excited and in a good mood. We met some nice people and I got to photograph a cool mushroom while we waited.
The Park Service finally opened the gate a little after 8 AM and we were soon in The Cove slowly following a line of cars around the loop.  As planned we took Hyatt Lane across to the other side to get to our spot and set up.

I really had no idea how many people would want to watch or photograph from our spot.  We saw very few cars go by while we waited.  Where were all the cars?  Knowing that we would be waiting for most of a day I brought our bikes.  I rode to the Cable Mill for a bathroom break and found the cars.  It was a difficult ride because the cars were moving too slow for me to ride my bike and much of the time I was standing still waiting on the line of cars or walking my bike.

Turns out few people made it past the mill.  There were hundreds of cars and thousands of people at the Cable Mill area. Other than another photographer and a young couple we had the Oak tree to ourselves.

That old Oak is the most photographed tree in the park.  Try Googling "The Tree Cades Cove" and you will see hundreds of photos.  Like all photographers who visit the park, I've also photographed The Tree many times but never gotten up under it.  We were there for the shade and hopefully to include part of The Tree in eclipse photos.  What we found was a wealth of photos waiting to be made.  These are some of my "bonus shots" I found while waiting under The Tree. 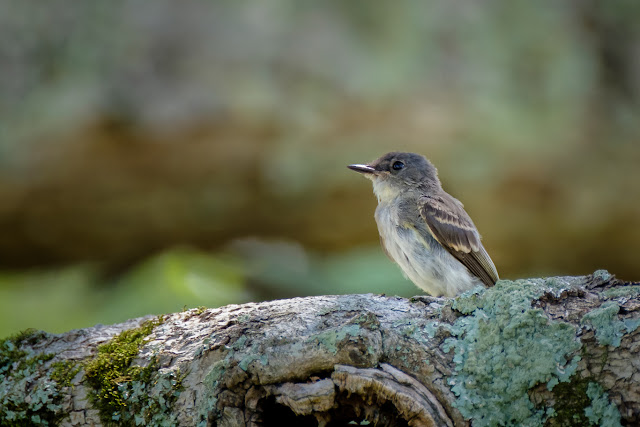 There were many song birds among the branches of the Oak tree and in the grasses of the recently mowed field.  We were there for several hours, giving me many opportunities to photograph them.


The one thing I couldn't plan was the weather, but by the time the eclipse started we had mostly clear blue skies with only a few clouds.  However, not all my photography plans worked out.  I gave up on the shot with the tree and the sun and put that camera up.  I did take close up photos of the sun every 10 minutes to use to create a composite of the different phases. 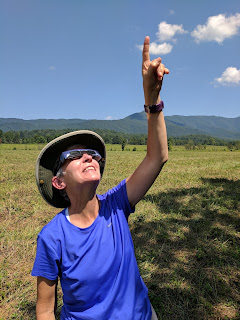 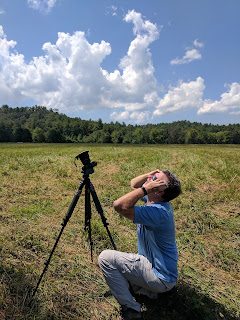 All my planning didn't prepare me for the actual totality event.  When it happened, it got dark very fast and I got excited.  I needed to change camera settings and it was dark enough that I had a hard time seeing the dials on my camera.  The exposures weren't working out anything like I planned and I didn't realize until it was over that in the excitement of the two minutes of totality I forgot to remove the solar filter from my lens!  I didn't get the cool totality shots that everyone else got, but I am happy with what I did get.

Although the totality only lasted 2 minutes where we were, it was worth everything we put into it. I'm planning to go to the next one on April 8, 2024.  Less than 7 years away!  I wonder if I will find a spot with birds, flowers, and an old Oak tree...
No comments: Links to this post