Sometimes you need more than one exposure

I was at the Grandfather Mountain Nature Photographers Workshop this past weekend.   In addition to spending the weekend with great speakers and and a fine bunch of photographers, I also got to be on the mountain after dark.  That meant staying up late to get the sunset and then getting up at "0 dark thirty" for the sunrise.

I was one of the first to drive up the windy road to the top of the mountain.   I staked out my spot looking East and waited for the light show.   The mountain blocked sunrise and there were few clouds so nothing very spectacular developed in the sky that morning.  However, I did catch several other photographers rushing to the top to get there for sunrise.

When I got home and started going through the photos from the weekend I noticed that I had taken several from the exact same spot with the camera mounted on the tripod.   Here are three of those. 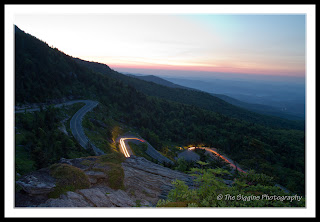 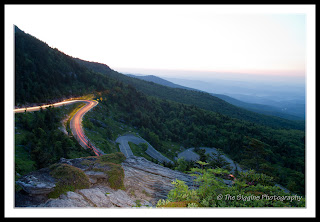 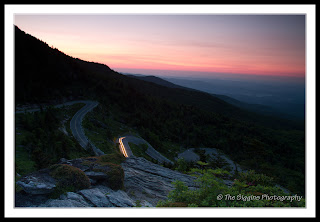 All were taken at f/8.0, ISO 320, 17mm.   The exposures were 15, 25 and 6 seconds respectively.   I used a two-stop graduated neutral density filter on each one.
The light trails from the tail lights were interesting in two of them and the sky was pretty nice in the third, but none of them were keepers by themselves.  Because the camera didn't move and only the exposure time varied between shots I was able to use Photoshop Elements to stack them together as layers and use layer masking to blend the three together.  Layer masks is one of the most powerful features of Photoshop and was exactly what I needed.  I'd never tried this before but with Scott Kelby's Photoshop Elements book  and 30 minutes I came out with this.
﻿
I then used Lightroom to adjust the tone, clarity and vibrance in the final image.  I'm not a big fan of photoshopping a photo to create something that wasn't really there but am pretty happy with these results.   I don't think I could have gotten an image like this with just one exposure.