Time for the second curtain.

OK, this is a bit of an advanced topic but one that fun to try.   It's called second curtain flash, rear curtain flash or show sync flash.  I mentioned it to a friend and accomplished photographer Saturday night and he had never heard of it.   That made me think maybe I should blog a bog on the second curtain.

First, a little explanation of how a camera shutter works.   There are two halves called curtains and they work just like a curtain would.   Before you click the shutter release the curtains are closed and no light is reaching the sensor.  Imagine a stage with the curtain closed.  The place where the two curtains meet is all the way on one side of the stage.  When you take the picture the first curtain slides open exposing the sensor (stage) to light.  Once the time determined by the shutter speed has been reached the second curtain slides across closing the shutter.  Unlike a theater curtain this all happens very quickly around 1/60 of a second.    But if your shooting under low light conditions you might have a long shutter speed.

First / second curtain setting determines when the flash fires.  By default the sequence of events (first curtain) is as follows
When the camera is set to second curtain the events are slightly different
Under most conditions this makes little difference to the photograph.  It does make a difference when the subject is moving and you use a flash.   When the flash fires it produces a bright light for a very short time, which freezes motion.   If you shutter is open longer than the time the flash is on then any movement will create a ghosting effect.  You know, the blurs where people moved while you were taking a longer exposure.   First or second curtain setting determines where the frozen image is in relation to the blur.   With first curtain you get the sharp image when the flash goes off, then the blur.   With second curtain you get the blur then the sharp image.  Confused?  Take a look at this image. In this image the car is moving from right to left.  I shot from a tripod with a 1.3 second exposure and my flash set to second curtain.  During the 1.3 seconds the car moved across the frame leaving streaks (it was moving slow).  Then the flash fired and froze the car in place on the left side.   To me this seams like a more appealing image than with first flash in which case the car would have been frozen on the right with the blur moving to the left if front of the car.

Here's a second example with a 0.6 second exposure.  It was much later at night than the first image, which was a dusk where there was more ambient light. 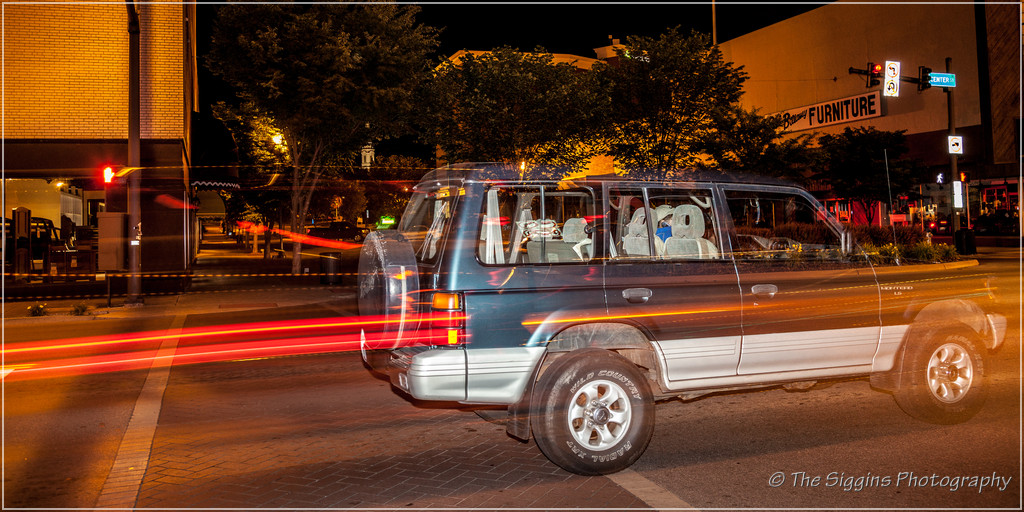 The can see the driver is frozen talking on her cell phone  (not a good idea) but the tail lights create a cool cartoon blur effect.

Want to see more examples?  Do a google earch for second curtain flash images. If you want to read more check out Neil van Niekerk's blog.

I'm pretty sure most cameras have this feature but it may be down deep in the menu.  Another case where you want to get your camera manual out and actually read it.