What to do with grey cloudy day photos

During our recent trip to Nova Scotia we spent several days with rain, clouds and fog following us everywhere we went.  We basically had dull grey days.   These are great for some photos where the fog can enhance the mood, especially if the photo does not contain any sky.  See the Rainy Days and Fridays post from October 14 for some examples.   Sometimes you can't avoid getting a large part of the sky in the photo and mood comes out blah like this.


There are always options for dealing with these dull photos.   For fun I processed this photo four different ways.  The first one is the photo above edited in Nik Color Efex 4 using the Detail Enhancer filter.   This is a great filter that was added to version 4.  It will pull details out of the dark and light parts of an image without adding a lot of noise.  This filter alone is worth the price of the upgrade!  In this case it really brought out the detail in the lighthouse, rocks and gave the clouds a very dramatic feel.


This is better but other than the red lighthouse top, there is not much color.   Sometimes no color is better than a little color.   Here's the second image edited with Nik Silver Efex Pro to convert it to black and white.

I'm really starting to like dramatic black and white images like this.  Without the dull colors, you concentrate more on the textures, contrast, and composition.   I think this is my favorite version of this photo.

Finally, I though I would try something I've seen others do.   Starting with the second image in Lightroom I desaturated all the colors except red.   This essentially created a black and white except for the  lighthouse top.  Our eyes are naturally attracted to red so it's the thing you want to look at first in this image.

I'm not a fan of this style and this is not my favorite of the four.   The good news is everyone has different taste and this might appear to someone.  I'd love to hear which one you prefer.  Post a comment and let me know what you think.

These are photos of the lighthouse at Peggy's Cove in Nova Scotia.   Peggy's Cove is a quaint fishing village that draws tourists by the bus loads.  The day we were there it was cold and the winds were gusting to 80 mph.  The tour buses were there but not many of the tourists were out on the rocks or near the lighthouse.   Made it easier to photograph without people in the picture, but the winds made it very hard to get a sharp photo.  I set my tripod as low as it would go, sat on the ground, and held it down so the wind wouldn't blow it over.   I felt like a Weather Channel reporter when I was taking these photos.   June was on lower ground praying I didn't blow off the top of the rocks.

Here's a couple more from that day. 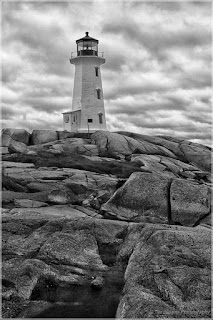 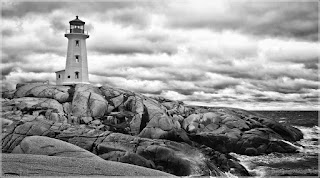 You can view larger versions of any of these photos by clicking on them.  This also allows you to easily flip through each one to compare them.  They are also available for purchase in the New Brunswick and Nova Scotia Gallery