For a few months now people who used Firefox, Chrome, and some other web browsers had difficulty viewing my blog.  Something happened that caused links within a blog post to no longer work.  After waiting for a fix from blogger, I decided to recreate my blog site design from scratch to see if that would fix the problem.

The links now work but the site looks a little different.  I was not able to make it look exactly the way it did before.  But change can be a good thing, right?

We all need to be renewed from time to time.  Romans 12:2 says "Do not conform any longer to the pattern of this world, but be transformed by the renewing of your mind. Then you will be able to test and approve what God's will is--his good, pleasing and perfect will."

Renewing ourselves is not as easy as renewing a website.  Once something is gone from a website it is gone.  Our old habits are not that way.  They can be ingrained and tend to come back when we're not expecting them.  Renewing is not a one time event but a continual process.   The good news is we have the Holy Spirit to help us in that renewal process.

May your days be full of renewal!

I'm blessed to be able to live in a part of the country that has four seasons.   Although some of my friends and family in Florida may not think so, even winter is a welcome change from the monotony of tropical living.

My favorite seasons are Spring and Fall.   The freshness of Spring with all the wildflowers blooming all around just makes me feel good.   Walking though the woods surrounded by flower and brilliant new green growth can recharge the deadest personal battery.   With the many different varieties of plants and flowers Spring can last for many weeks. 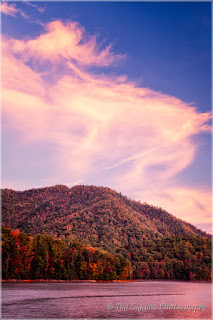 Fall is a different story.  Once the leaves start to turn it's not long before they go from brilliant to gone.   Often I only get one good weekend to get out and shoot fall colors before the yellows, reds, and oranges are  brown and down.  This fall I had a free day to go out and shoot and I chose to head up to the Blue Ridge Parkway in North Carolina and see what I could find. 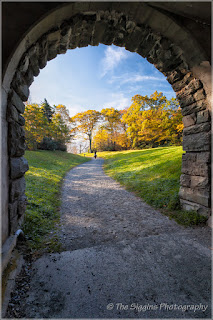 On the way from Kingsport to the Parkway I got to Lake Watauga at sunrise.  I was the only person out there that morning.   I don't think anyone even drove by while I was there enjoying the peaceful morning on the lake.   The "golden hour" light gave the clouds a nice pink color.


After a stop in Boone NC for a Hardee's biscuit I stopped at the Moses Cone Mansion on the Blue Ridge Parkway.   My favorite shot of that stop was looking out from a walkway tunnel under the parkway.   I went for that shot because of the fall colors and blue sky but was given a bonus when a girl rode by in her equestrian riding outfit.   I should have stayed in the tunnel and took some more shots but I didn't want to spook the horse in the tunnel.   I wish I had that opportunity again.

A little ways up the road was a small pond surrounded by fall colors. There was little to no wind but the skies were starting to cloud up, which made the colors really pop, but was a preview of the rest of my day. 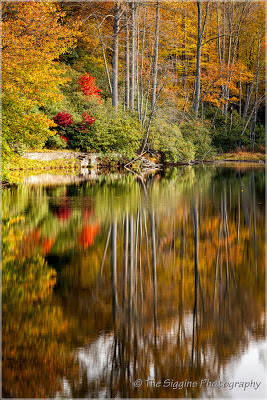 Soon after leaving the pond the clouds rolled in and descended on the Parkway eliminating any chance of the grand vista with blue sky shots.   I stopped and hiked up the Rough Ridge Trail which is a great trail.  The fall colors were still pretty nice but the clouds were still with me.   I made the best of the overcast conditions by taking several pictures under the trees with no sky, including this one that looks like Elves and Hobbits should be walking by, and a great arched bridge where trolls could be hiding. 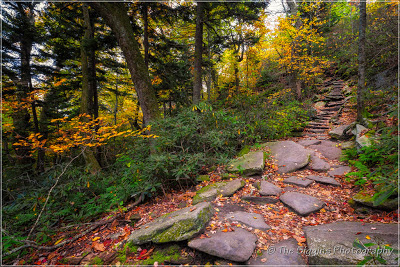 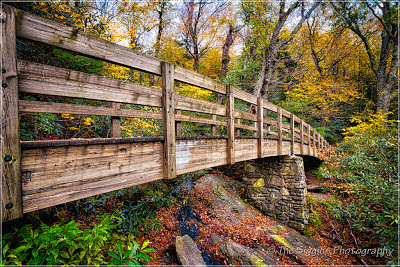 I did take one shot of the Blue Ridge Mountains from near the top of Rough Ridge.   Nice fall colors but wouldn't it look great with a blue sky and white puffy clouds? 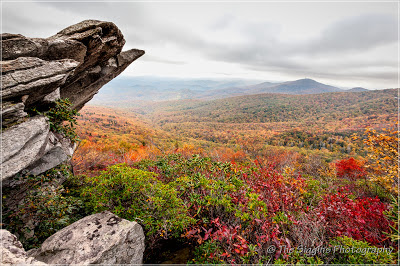 It was the best day for fall color photography I had this year.  Six days later everything was past peak and done for the year.   Now we've had an early winter with more than a foot of snow in the mountains.   This time I was at Hilton Head and missed the whole thing.   My son got great pictures from Roan Mountain, which makes me wish for more snow.  The good thing is winter lasts much longer and I'll have more opportunities to get out and shoot some in the snow before we start over again with spring in 2013.

These photos can be ordered from my website under the Blue Ridge Gallery.
No comments: Links to this post