Shooting without the accessory I use 95% of the time

Hi.  My name is Richard and I'm a tripod addict.


There, I said it. Now I can start a 12 step program for photographers addicted to their tripods.

I carry that thing pretty much everywhere my camera goes.  I almost never take a photo without my camera on the top of that tripod.  It can get a bit heavy on long hikes but still I carry it.   June will even grab it and carry it when I'm not looking.

The reason I use that three-legged beast is most of my photos are landscapes that benefit from a small aperture to get a maximum focus range or depth of field (DOF).   A small aperture means I also have a slow shutter speed and I need the tripod to hold the camera steadier than I could ever do hand holding it.  The other habit I have developed is to keep my ISO (camera sensitivity to light) as low as possible to minimize digital noise, which is that unpleasant graininess in some photos. Low ISO means slow shutter speed.  I considered my tripod a necessity, which is why I haul it around the country.

Recently I hauled the tripod all the way to South Korea for a 13 day vacation.  This was our first trip where we did't have a car to carry all the camera gear to every destination.  It didn't take long to realize that carrying the tripod on crowded subways, busses, and taxis or setting it up in crowds was not going to work.  After hauling it half way around the world, I only used it once one night to make some long exposure cityscape photos.

I learned on that trip that I don't have to have to rely on the tripod as much as I had been. I could live with a little wider aperture and a little less depth of field.   I learned I can bump the ISO up much higher than I would have considered when using a tripod.   Most of the digital noise can be removed with software such as Adobe Lightroom or Nik Define.


The other reason for using a tripod is when taking multiple exposures for High Dynamic Range (HDR) photography.   For HDR to work each photo must line up with all the others and none can have motion blur from camera shake.   I learned in Korea that you can make HDR photos without a tripod. 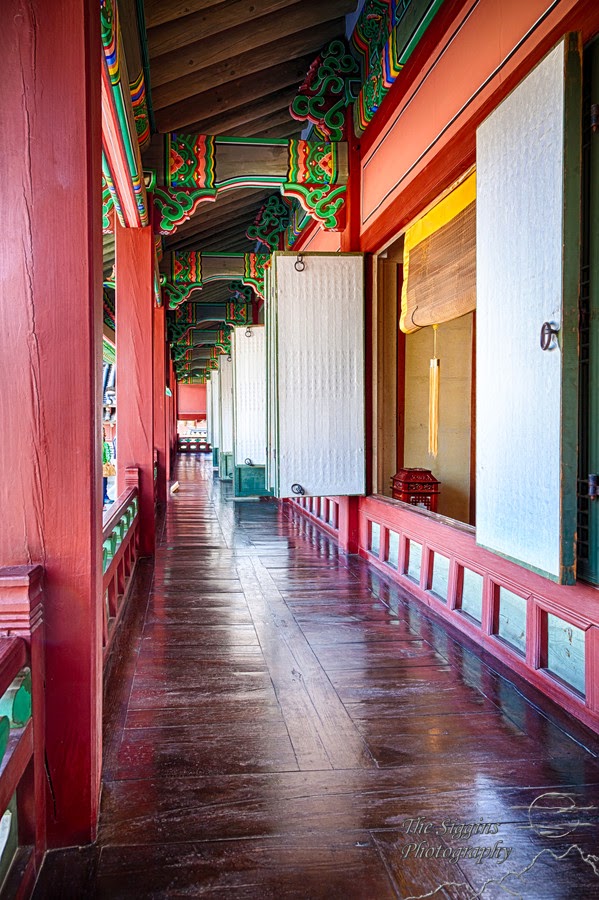 The HDR photo above was created with three shots (1/60, 1/25, 1/10 sec.) and combined in Nik HDR Efex Pro 2.  Even handheld I was able to hold the camera steady enough for the three shots to line up and not have any noticeable blur from camera shake.

There are a number of techniques for reducing camera shake when hand holding your camera.  I could go on about it here, but others have already done a great job

I'll still use my tripod when it's convenient, but I'm also going to branch out and go sans-tripod more.  Who knows what other bad habits I'll be able to break next.

Sometimes You Just Get Lucky

I wish I could say I planned this photo, picked the right time of day, hired a model, and made it all come together.  I can't.   What I can say is I was at Gyeongbokgung Palace in Seoul South Korea with thousands of others who were there to celebrate Buddha's Birthday.  I thought the walkway with the red columns and beautifully painted ceiling was interesting and worth a minute to take a couple shots.   I used the lens I had on the camera (24-105mm) walked a few steps and started to shoot a few shots.  Then this lady in historic costume walked into the scene and down the walkway.   She made what was going to be an mediocre photo into something that told a story.  She doesn't know it but she made my photo. 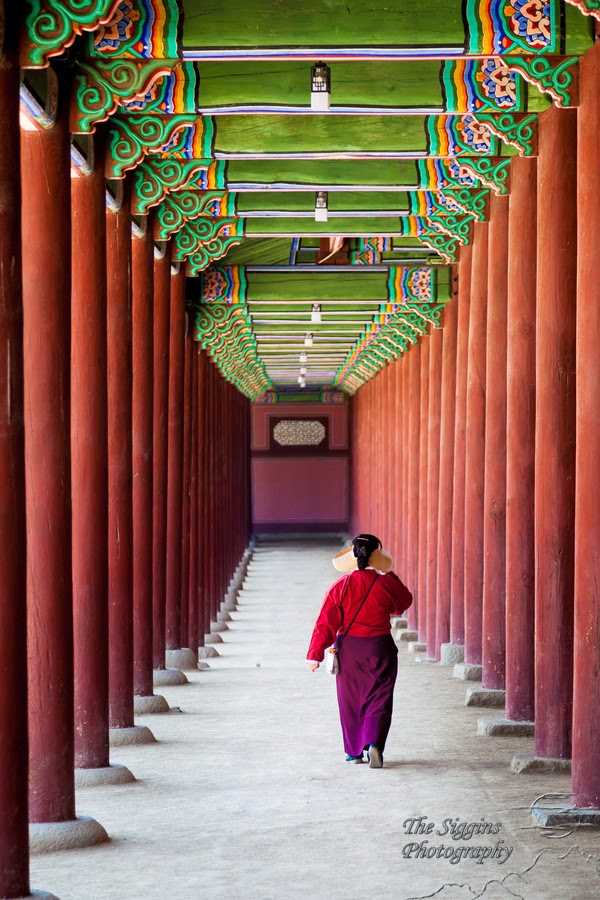 Sometimes you just get lucky.   I'll take it every time.

We returned from our Korean travels two weeks ago today and I am still working through the images from that trip.   I've reduced the 3,000+ images down to 1,162 and am about 15% of the way through.   It's going to take me a long time to go through these but I'll get there.  Once done I'll put my favorites on my web site for anyone to enjoy.  Stay tuned.
No comments:

I'm late, but I have a good excuse

I should have posted a blog about the May calendar photo back at the first of the month, however I have a good excuse.  June and I were in South Korea for the first two weeks of the month and have been busy getting back into the swing of normal day to day life since we got back a week ago.   I'm not saying we're over the jet lag of 13 hour time difference, but we are getting closer to a normal life again.

I really like the quote from Ralph Waldo Emerson.   After 13 days in the hustle and bustle of South Korea I can appreciate the pace of nature.   I'm more tuned to a quiet evening an a lake with no one else around except the wildlife than the big city life.   I get recharged by a scene like the one below. 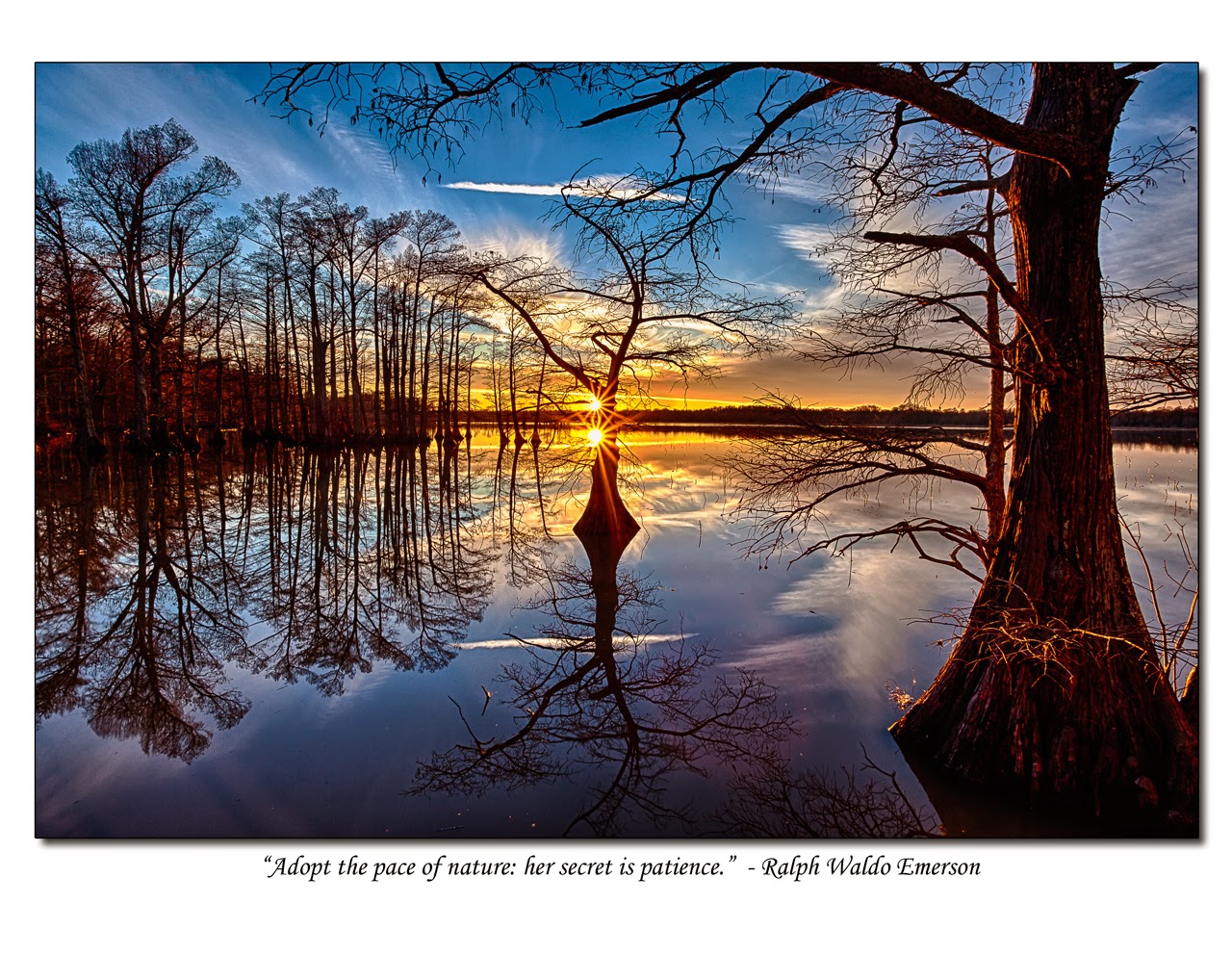 This photo is unique because there appear to be two suns setting across the lake.  The top star burst is from the sun and the bottom one is from the reflection of the sun in the lake.  It is a bit strange to look at.   I could edit out the bottom star burst but then it wouldn't be what I saw on that cold evening in February.

It's easy to capture a photo with a star burst like above.   First, you will need a strong point light source.  I typicall use the sun, but will position my camera so the sun is partially obscured from view.  This makes the light source appear smaller, which will give a better star burst effect.   You also need to take your camera off auto and put it in Aperture Priority (Av) or Manual (M) mode and set the f/stop to as high a number as your lens will support.  This is typically f/22.   The combination of the small aperture (large f-stop number) and a point light source will create the star burst effect.

In an earlier version of this photo, I had done some edits to lighten the tree trunk on the right and give the effect that the sun was shining on it and showing more details than the camera could capture.   The feedback I got on that version was not possible.  People did not like that because it is not possible for the sun to light that side of the tree trunk.   I toned down that effect and didn't get any more negative comments about my post processing edits.

I pray that you will appreciate the patience of nature - slow and beautiful.