I've been slacking.  I haven't written anything about the photos in my 2015 calendar yet this year.  And February is almost gone!   As I write this our third big snow storm of the month is rapidly approaching.  I think I'm ready for March and the promise of spring.

The photo for February was taken from the pulpit of the Cades Cove Methodist Church in the Smoky Mountains National Park.   John D. McCampbell, who was a carpenter and the pastor,  built the church building in 1902 in 115 days for $115.   How's that for a church building campaign?

The building featured two front doors, a common feature of architectural feature in the 1800s, which allowed men to enter and sit on one side of the chapel and women and children on the other.  In a move that may have raised some eyebrows at the time, the Cades Cove Methodist Church permitted its congregants to sit where they pleased instead of separating the men from the women.. 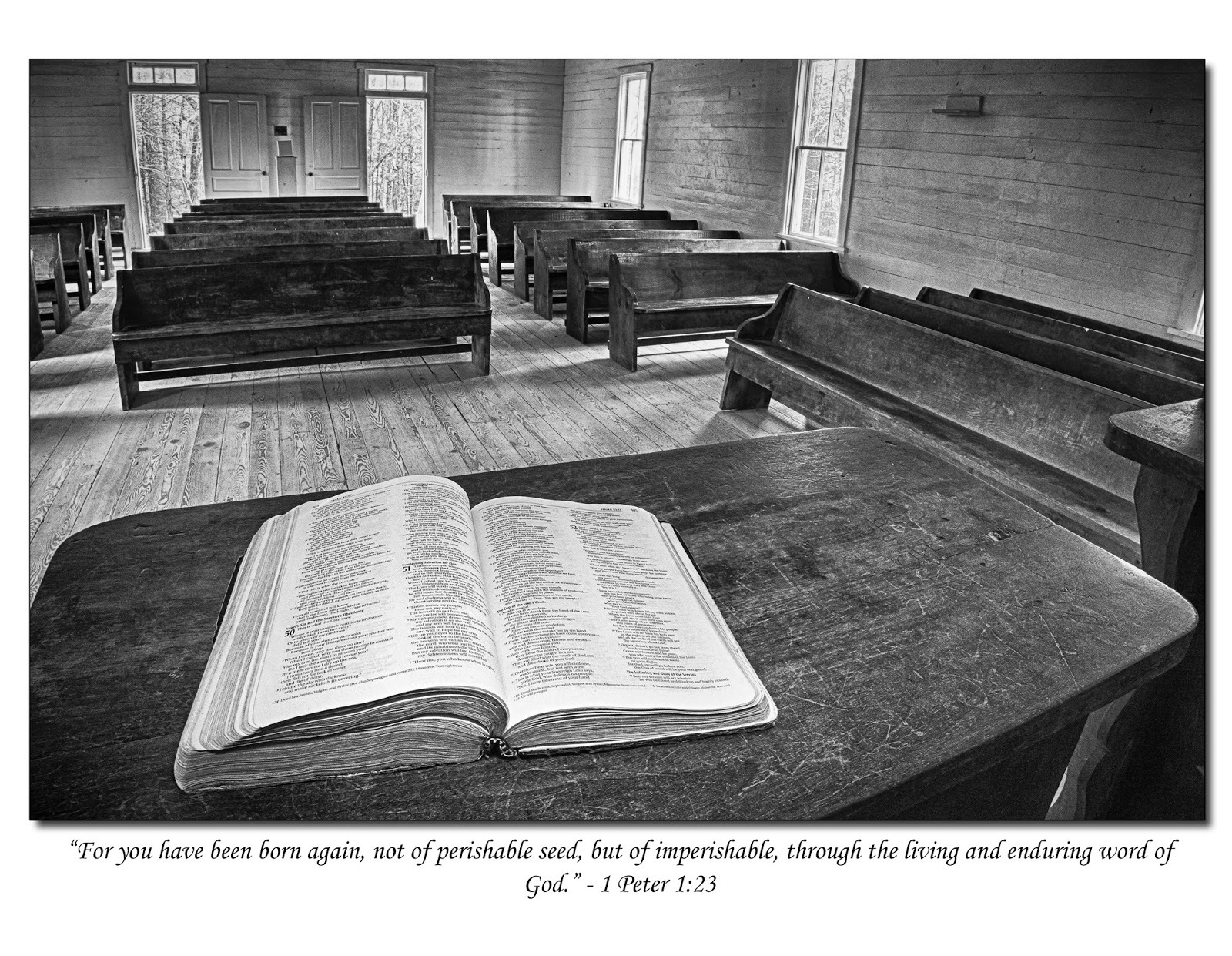 The church was affected greatly by the Civil War.  Divisions among the congregation during both the war and Reconstruction resulted in a church split and the formation of the Hopewell Methodist Church, which not longer stands.

Today the Cades Cove Methodist Church is visited by hundreds of people every day.  We were there on a cold early Spring day and pretty much had the church to ourselves.   With no light other than what came in through the windows, the photos required a long exposure time.  However, those long exposures meant everything outside the windows was completely washed out.  I created a High Dynamic Range (HDR) photo by combining 7 different shots with exposures ranging from 0.4 seconds to 30 seconds.

I wanted the words in the Bible to be clear and even readable in the photo.   I also wanted the back of the church and the trees outside to be in focus.  To get that extreme depth of field I used a very small aperture of f/22.

All this photo needs is for the pews to be full of people in the clothes of hard working farmers from the early 20th century.  They might have been listening to a sermon on perishable vs. imperishable seed.   The Word was on that pulpit in 1902 and it's still there today.

The wide photo at the bottom of the calendar page for February is also from Cades Cove.  It was taken from the loop road looking across the cove to the mountains to the south.   You can't find a prettier place in the park.
No comments:

A few weeks ago I had surgery to remove the lens in my right eye that had become cloudy due to cataracts.   I had been living with blurred vision in that eye for a few years and it had finally gotten to the point where it needed to be replaced.  My vision in my left eye was good due to the glasses I wear, but there was no corrective lens that could compensate on the right side.

The thing that made the situation so frustrating for me is my right eye is my dominant eye and the one I use when taking photos.   I tried using my left eye to compose my shots and focus but found it just didn't work for me.  It was like trying to sign my name left handed.

I could no longer tell if what I saw through the viewfinder was in focus on not.   If I could put the camera on a tripod I would use the LCD screen on the back of the camera to manually focus to compensate, but there are situations that made this impossible.

Within hours of the surgery, I could see a drastic difference in my vision.  As the days passed I was amazed by the difference.   Everything was brighter and clearer.  It was like going from an old 1980s TV to a modern ultra high-definition TV.  The thing I didn't expect was the color change.  My old lens had yellowed over time and gave everything a yellow tint.  My mind compensated for it but now I can see the difference when comparing my right eye to my left that is still yellowed.

I've failed to adequately explain the difference in my vision. It's just hard to describe.   Then I realized I have the tools to show you the difference.

This is a photo I took this past Saturday.   The really cool thing is I was able to look through the viewfinder and manually focus on the bird.   This was the first time I've been able to do that in years.   I was a great feeling to be able to tell that my shot was in focus when I took it.

I highly recommend the surgery for anyone dealing with cataracts.  It was quick, painless and amazing.  I only wish my left eye was bad enough to have the same surgery on that side.

What's My Go To Lens?

I was asked today what my "go to" lens is.  It was easy because I know off the top of my head which one I use the most.  It's the Canon 24-105mm f/4 L lens.  It's a great general purpose lens.  If I had to take just one lens with me on a trip this would be it.  It's light, small, has a useful focal length range, and can produce some really nice sharp photos.


But what about the other lenses in my bag?   I saw a blog this evening by Patrick Endres that showed how often he used his lenses and showed the numbers in a pie chart. His top lens was the 24-105 as well.  Since all my photos are in Lightroom it took me all of about 2 minutes to see how often I used each lens in 2014.  Only photos I have kept are included, but the numbers should be representative of how often I use each one. 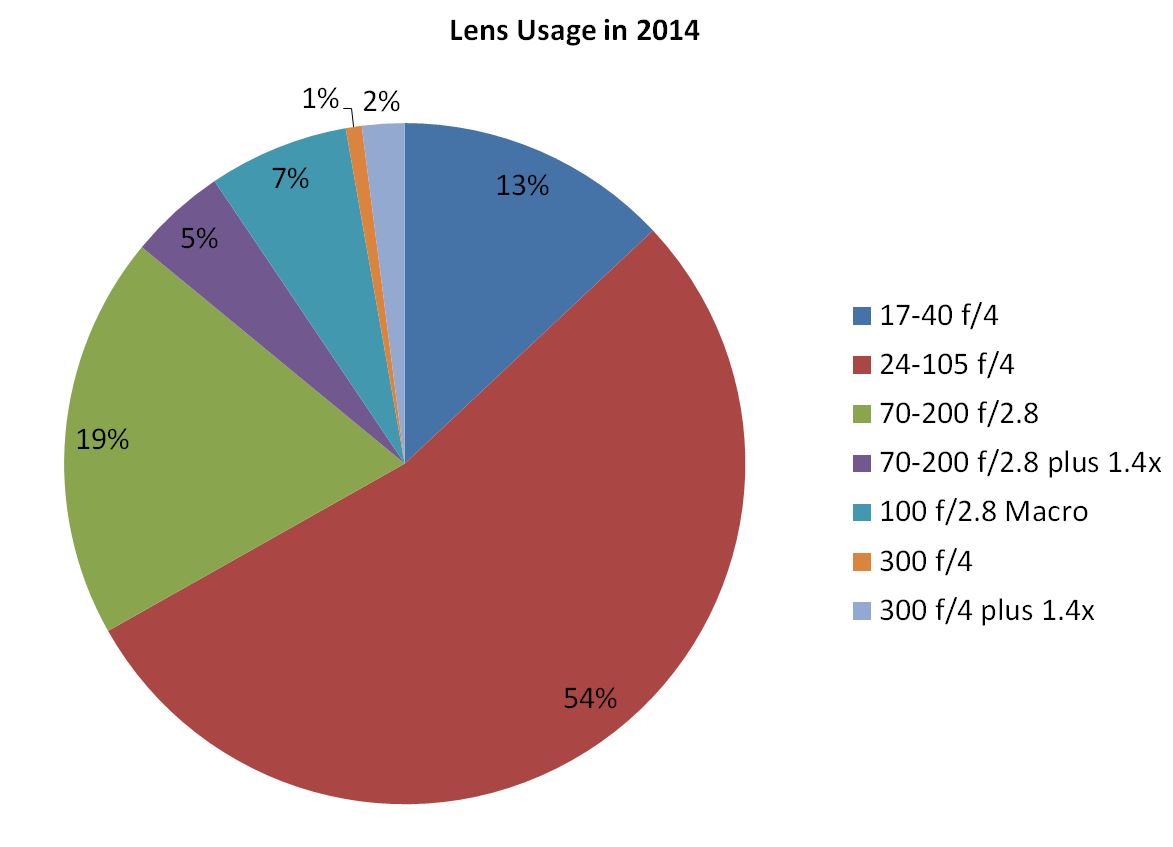 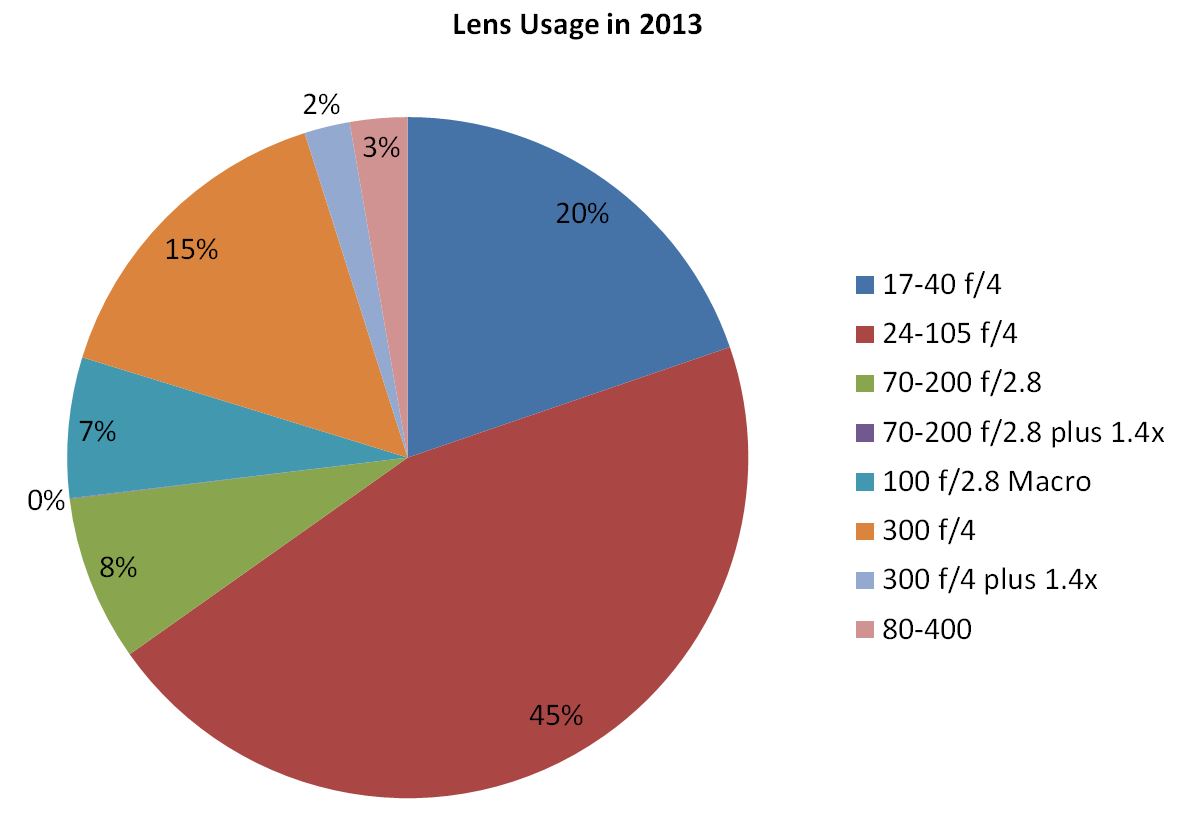 What does all this mean?  One thing it tells me is I don't have to pack all my lenses when heading out on a photo outing.   If I take the 17-40, 24-105, and 70-200 I'm going to have most all situations covered.  I will probably take the macro lens on most hikes to capture wildflowers and small critters.   But what about that 300mm?  Is it a bad lens?  Absolutely not!  In fact, it's one of the sharpest lenses I have, even when I add the 1.4 teleconverter.  It's much lighter than the 70-200.  If I hope to photograph wildlife I'm going to take that lens along.  Being a prime fixed focal length lens it's just not as versatile as the others.

My numbers in 2015 will be different.  We are planning a big trip to Alaska this year.  You can bet I'm taking that 300mm with me with hopes of getting some wildlife shots.
No comments: