One of my photos is on the cover of a Literary Magazine in Australia. 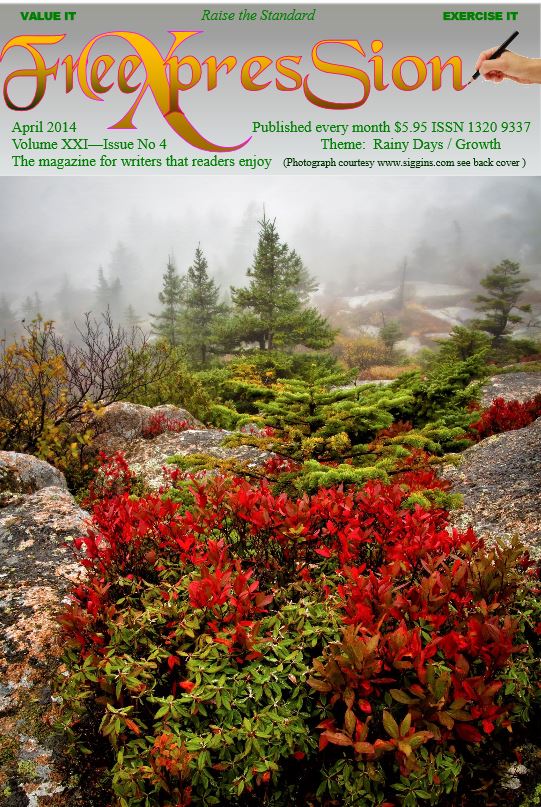 I don't want anyone to be over impressed.   This is a small circulation periodical and I donated the image.    I was flattered with the Editor contacted me and was more than happy to support this Christian publication. 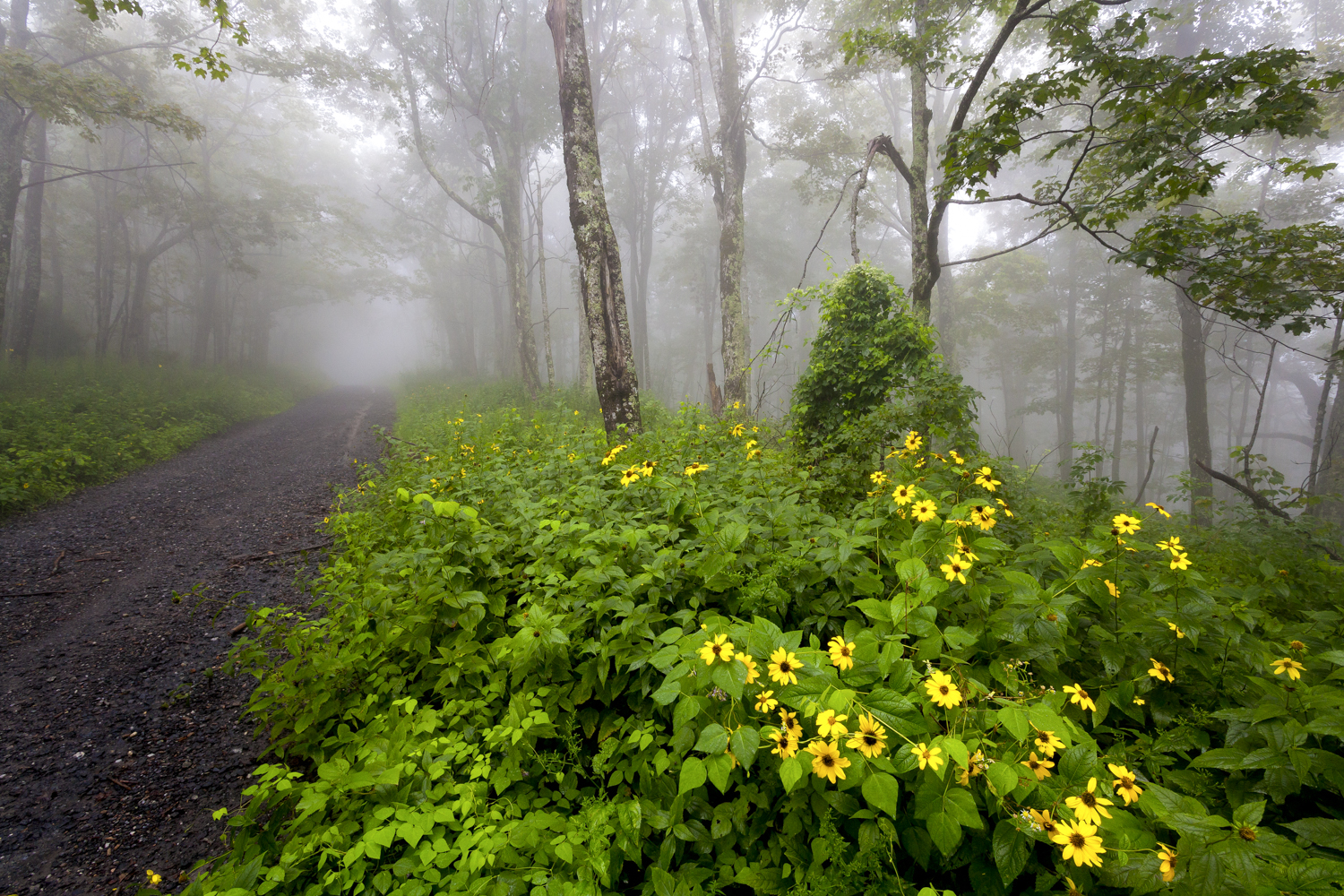 There was a fine rain blowing on Cadillac Mountain when I took the cover photo, making it impossible for me to see through my glasses to focus the camera.   I had to trust my camera to focus properly.  The photo above also involved a rain storm.  While I was still a ways off, I could see lightning flashing in the clouds over my mountain top destination.   I could have turned around but instead I continued on to the top.   In place of a mountain top sunrise I was treated to a forest scene bathed in fog.  Like with the cover photo, the storms rewarded me with beautiful soft light, much better conditions for photographing in the forest.

Trust is turning over decisions to someone else. Trust is not easy.   I trusted my camera because I had been using it for a while and knew it could focus correctly even when I couldn’t. Likewise I had to trust that God had something in store for me if I only continued to the mountain top.   There will always be storms in our lives.  We just have to believe that there is something better in store if we only trust The Lord.


Peter is going to mail me a hard copy from the other side of the world.  I'm looking forward to getting my very own copy.
1 comment:

In Search of Fog

The Smokey Mountains get their name from the blue haze that come from the streams, moist forest floor and thick vegetation that blankets to mountain sides and valleys. The Cherokee called the mountains Sha-co-na-qe, means "place of blue smoke."   You can see the smoky haze from a distance but most of the time you don't notice it when in the forest.

Sometimes a rainstorm will create a thick fog that rolls in and seems to seep into the forest.  When the fogs rolls in many people will stay in their warm hotels or cars and not get out in it.  When I see fog I grab my camera and head out to explore.  Foggy conditions can create nice moody and ethereal feelings.  Trees can fade into the fog as the get further away from the camera.   Harsh shadows from bright sun disappear and are replaced by even soft light.   It's a great time to photograph.

When June and I spent last weekend in the Smokies we had plans to hike most days.   It was cold, rainy and we forgot to bring our rain gear so instead of hiking we explored close to the car.  When it rained most of the last night we were treated to fog blanketing into the mountains the next morning.   We started at a lower elevation and chased the fog as it lifted up the mountain sides.   Our first stop was the creek at the Chimneys Picnic Area.  By the time we got down to the stream the fog had lifted.  Back into the car and chasing the fog up the road to higher and higher elevations.  When we reached the Newfound Gap Overlook there was a nice wispy fog blowing in and around the trees.

The further up the trail you look the more the trees fade into the fog giving a feeling of traveling into the unknown.   Everything was wet and even though there was no direct light there were still reflections off the wet surfaces.   I could have used a polarizing filter in this shot which would have taken some of the glare off the wet logs on the trail.

The fog was clearing at this high elevation and I figured my fog shots were done for the day.  Driving down the mountain back into Tennessee we ran into some of the thickest fog we have ever seen.  I was hoping to find a pull off where I could stop and get some more fog shots but the fog was so thick we couldn't see the pull offs until we were past them.   We finally found a large parking lot with a Quiet Walkway.  Thinking that we are "serious hikers" we have not tried these Quiet Walkways thinking they didn't have much to offer.  We discovered we have been missing out.  This walkway went through a nice open forest along an old stone wall and down to the Little Pigeon River.

The fog was very thick and beautiful here. 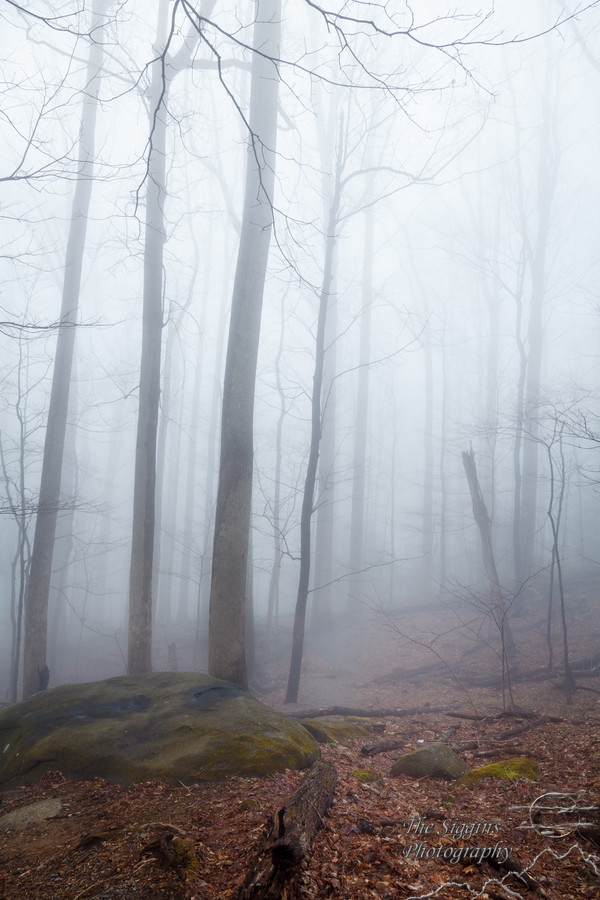 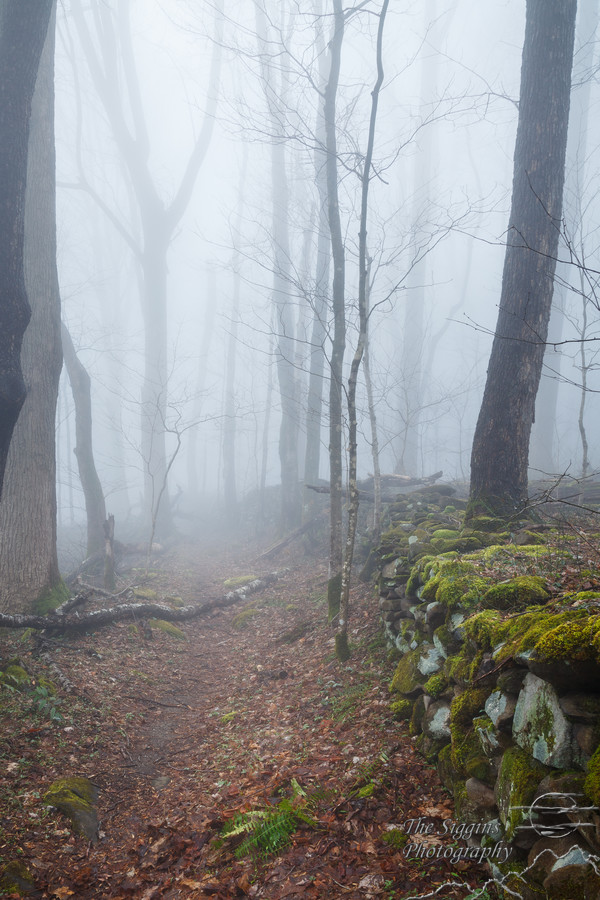 When shooting in fog your camera can be fooled by the brighter fog and under expose the shot.  Be sure to check your histogram and adjust your exposure to bring the histogram curve as close to the right edge as possible without clipping the right side.
What a treat we had that day in and out of the fog.   Not only did we have the beautiful fog but we also found two wildflowers on this Quiet Walkway that were about to bloom.

The next time were in the park we're going to check out this Quiet Walkway and others that we have been passing up for too long.
1 comment:

Calendar Chronicles - Footprints In The Sand

We have made it through February and started into March.  Spring will arrive soon in East Tennessee.  It can't come soon enough for me and never lasts long enough.   There is beauty in the winter season, but after a few months of cold, gray, brown, and bare trees it is time for some color and new growth.   Next month's photo is all about spring but the March photo is all about warmth.

Nothing says warmth like a sunrise or sunset at the beach.   While visiting my family in West Palm Beach Florida June and I got up early and drove down to the beach to see what the sunrise had in store.   We started out at Lake Worth Beach hoping to get some pictures of the sunrise behind the pier.  The parking lot was closed and we couldn't get down to the beach.   We headed north up the coast stopping at a public beach access, which was also closed due to beach erosion.  After driving past the classic mansions of Palm Beach we finally stopped at the public beach in Palm Beach.  It's always a good idea to allow plenty of time for sunrise photography because you never know what obstacles you'll run into and time, tide and sunrises wait for no man.

There is a story behind this photo.   When we arrived there was a young lady paddle boarding by.  I wanted to get a photo of her on her board with the sunrise behind her and took off running down the beach to catch up with her.   She probably wondered about the old guy on the beach chasing her.  I wasn't able to get the shot but my run did create footprints in the sand.   It's these footprints that make this photo.  They lead the viewer down the beach. 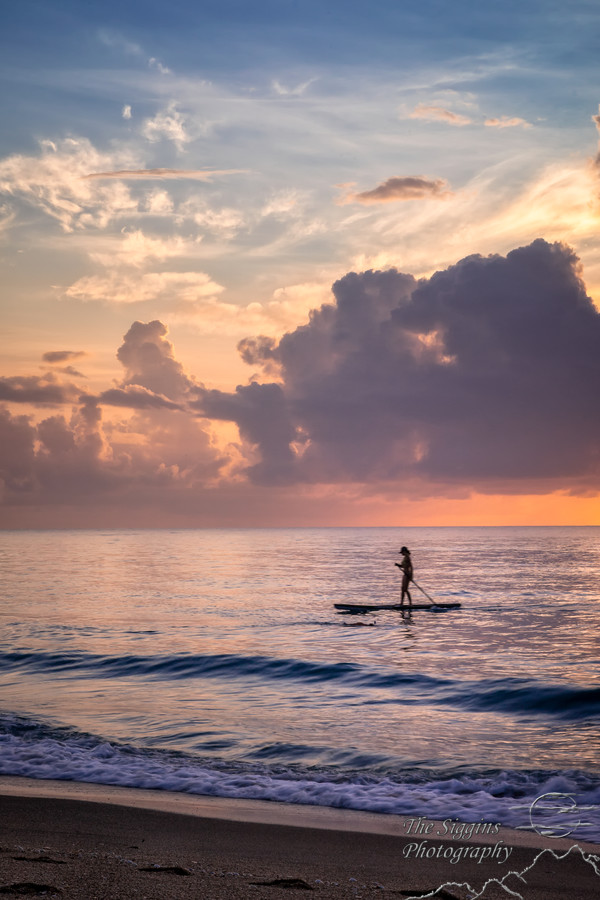 The paddle boarder did return later and I was able to take the shot I tried to get earlier.   I wasn't thinking clearly and didn't set my camera up for a fast enough shutter speed.  The 1/15 of a second exposure was way too slow and she is blurred in this photo.   This is why practice is so important.  You have to be able to quickly adjust your camera to rapidly changing conditions.   I can't go back and try this shot again but hopefully I'll remember my mistake and not make it again. 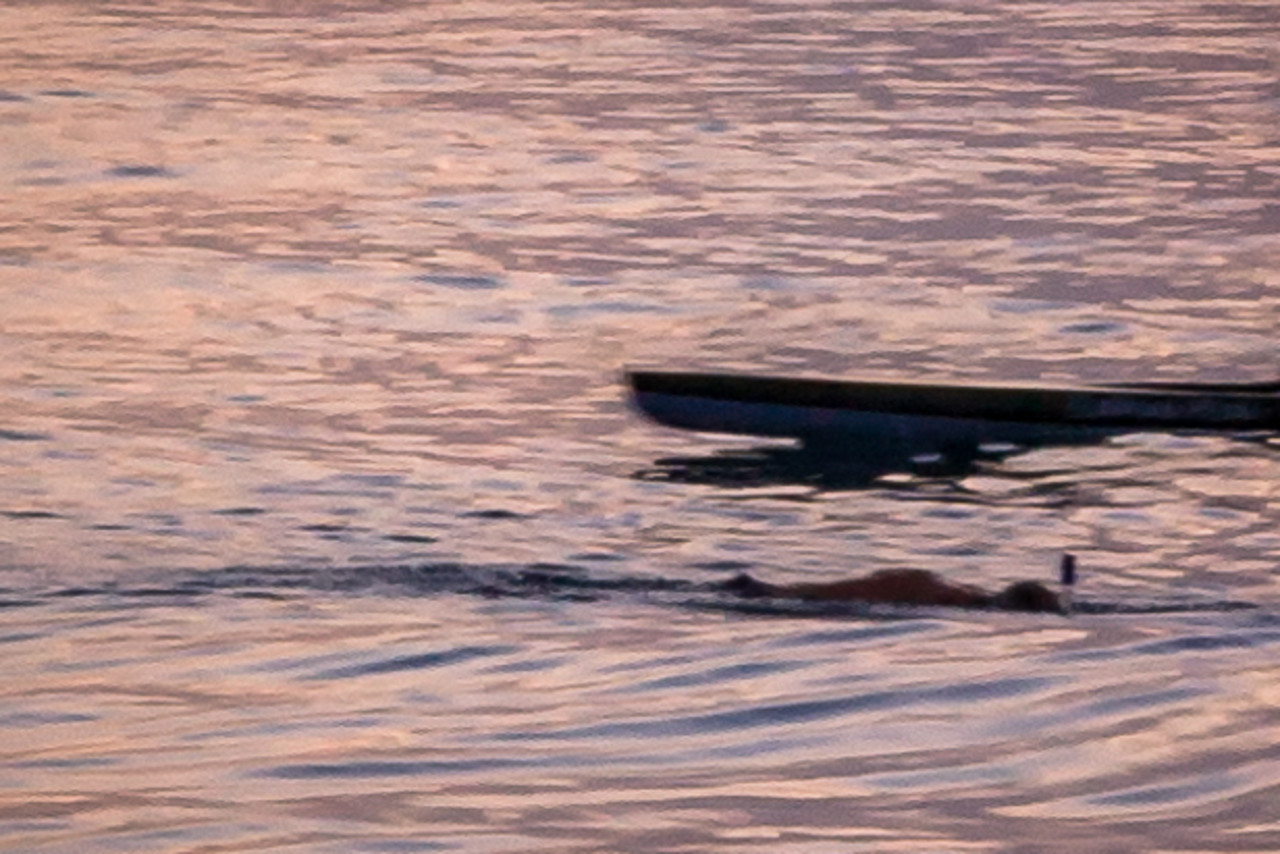 There is one other person in this photo that I didn't see until I got home and was editing the photo.  There was a snorkeler swimming by her when I took the photo.

We were blessed with a beautiful sunrise and interesting clouds.  It was a great way to start the day. 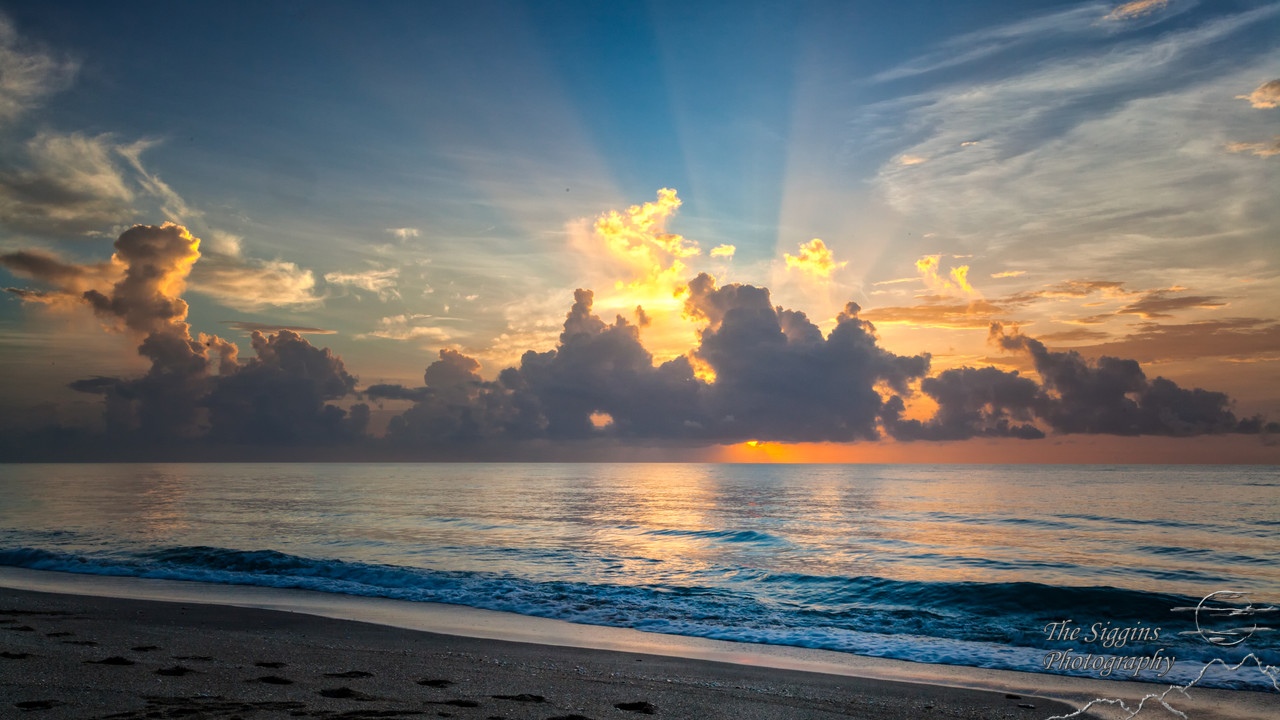 Let Heaven and Earth Praise Him!