After taking photos of a beautiful morning sky at sunrise, June and I stopped at theNewfound Gap Overlook for a short break.  When I left the restrooms I started running for the car.  June said "your running!", trying to figure out what was up.

What I saw was the morning sun hitting the trees on the other side of the gap making another beautiful scene.  By the time I got to the car, changed lenses and got back to the spot, the best light was gone.   That's the way nature works, sometimes the beauty only lasts a few seconds and if prepared you can capture some beautiful photographs, like the Awesome Sunrise Cloudscape.

Other times, the photo only captures the fading beauty like Newfound Gap.

For my photographer friends that are wondering, I didn't have time to think about which lens to use or grab the tripod.  I just slapped my 70-200mm zoom on the camera.  My first shots were duds because the shutter speed was too slow for hand holding the camera.  After cranking the ISO up a bit, I got one that was good enough for the web, but will never stand up to close examination.


"Sometimes I do get to places just when God's ready to have somebody click the shutter."
Ansel Adams

Sometimes I do get to places just when God's ready to have somebody click the shutter, but my camera is not ready.   At those times, the best thing to do may be to stop and enjoy the beauty God created for us.

I recently read an online article in the Washington Post that proves my assertion that we all take iconic photos.  My definition of an iconic photo is one that is taken thousands of times by thousands of people.  These photos often look very similar, only varying by season, time of day or weather conditions.   Sometimes the photos are copies of outstanding photos by famous photographers, such as Yosemite Valley from Tunnel View or the obvious vantage point people naturally gravitate to when photographing a scene, such as this view of Butchart Gardens in Vancouver Island, British Columbia, Canada.

Sometimes there are limited options which leads to everyone's photo looking the same.  An example is Triple Falls in Dupont State Forest.


There is really only one place to stand where you can see most of the falls.  This has led to everyone's photos looking pretty much the same.  I tried to be different by converting to black and white.

If you google for images on the internet you can find many examples of iconic photos.   Try it yourself by entering "Butchart gardens images" and look at the top images.  They will look very similar to mine.

Now, researchers at Google and University of Washington have taken this to the next level.  They have searched through 86 million images on publically accessible photo websites looking for "iconic photos".

The Butchart Gardens photo shows up around the four-minute mark in the video.

This video would not be possible without people's tendency to take iconic photos.   As you can tell from my photos, I guilty of taking them as well.  It's OK to take the iconic photo, just don't stop there.  Look around for other shots from different angles that also tell a story, like these, also from Butchart Gardens.


Have fun and go Beyond The Iconic Photo.
No comments:

Carrying on with my Simplicity theme I have recently tried to simplify some of my macros.   In this case, I was making photos of a plant growing in my parents yard.
In this first photo, I tried to simplify by getting close and eliminating everything except the subject, which is this cool leaf with buds popping out around the edge.  Not much else here to distract the viewer's attention from the buds. 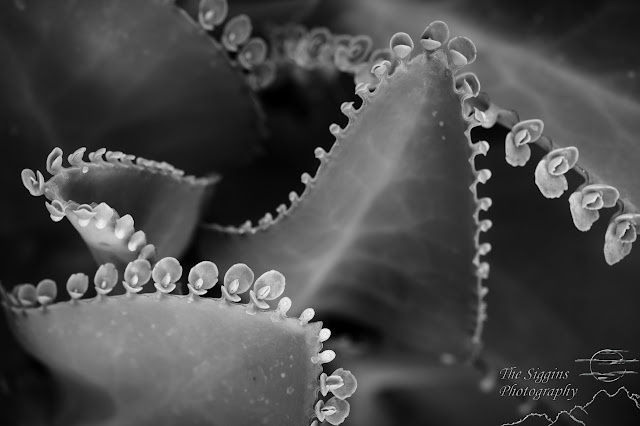 In the second photo, I simplified by eliminating color.   Everything is pretty much green but converting to a black and white removes the color element making is simpler.

Here I cropped down to just the buds with water drops.  Cropping eliminated everything I didn't want and left only the things I did. 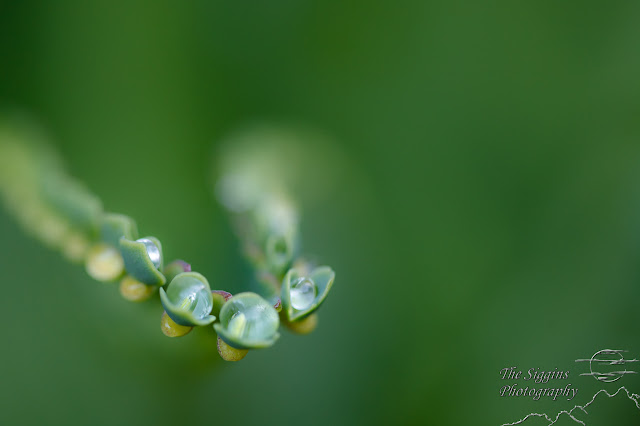 Finally, I used a shallow depth of field to blur out the background and drawing attention to the water drops on the end of the leaf.   This is a pretty simple photo.

Four different techniques to simplify a photo.  These can be used alone or in combination to creatively remove complexity and create simplicity.

I'm going to continue to try and simplify where I can.


"How many undervalue the power of simplicity!  But it is the real key to the heart."

Simplicity is the ultimate sophistication.

I should be out in the yard working today but instead I'm working through some photos I took over a month ago.  I'll get out soon, but I want to share these two photos.

Both photos were taken at Anna Ruby Falls in North Georgia.  They were taken a few minutes apart on the same day.  Here's the first one.

This is the classic shot taken at a wide 17mm focal length.  If you Google Anna Ruby Falls you will find dozens of very similar photos of the falls.   I took this to show that Anna Ruby Falls is actually twin waterfalls created by two separate streams- Curtis Creek and York Creek.  It was a bright sunny day, and I had to take three shots at different exposures and combine them using HDR software to balance out the super bright and very dark areas.

I really don't care for this photo.  There are too many rocks, logs and other stuff within the frame.  Too much to look is a distraction and doesn't give the viewer a single place to look.  When I look at it,  my eyes wander around the photo looking at everything but not focusing on any one thing.  It's not a pleasing photo.

Here's the second photo taken from almost the same spot.  This time I shot at 200mm allowing me to zoom in and isolate down to a small tree and a section of the falls behind it.  Because I didn't have to worry about the dark areas, I was able to expose on the dark side, keeping the bright spots of the waterfall from being too bright and losing all detail in the water. The light on that morning was bright and harsh, but on that section of the falls it was beautiful.  I also slowed the shutter speed down to 1/4 second, giving the water a nice silky blurred look.

This second photo is much simpler, and in my opinion, more pleasing to look at.  The tree in front of the falls gives the photo a feeling of depth that it wouldn't have if it was just the falls.  There are only two things in this photo - the tree and the falls.

Simplification in my photography is something I want to keep working on.  It's also called minimalist photography.  Here's a good article that explains that better.  Give it a try and see if your photos aren't better.