Getting Over Bad Light

"The truth is... there is no such thing as bad light, only bad
attitudes. We all want to be rewarded with shimmering shafts
of light, dancing rainbows and fire in the sky. When we don’t
get nature’s be-jeweled finery we feel ripped off. But nature
rewards those with open minds and open eyes. All we need
is to drop our expectations of ‘trophy’ light and accept the
little gifts to be found in ‘bad’ light. Great photos can be made
anytime, even on grey, drab days."

Back on January 12 I blogged about Good and Bad Light.  In that post I said that in landscape photography you have to take the light God has given and work with it.   Good advice I forgot on a recent trip.

On our trip to Charleston SC a couple weeks ago we had planned to go to a couple plantations / gardens to make great photos of blooming flowers in a beautiful garden setting.  Of course the best light for this kind of photography is slightly overcast and that was what I was envisioning for weeks before.  What we got was multiple days of bright sunny cloudless days.

Given bright sunny days, the best conditions  to shoot was going to be during the "golden hour" which is the hour around sunrise or sunset.  Being on the coast  June, our friend Tekii, and I decided to go to the beach or waterfront to catch the sunrise instead.

The sunrise was beautiful even without the clouds that can add drama to a sunrise.

After breakfast we arrived at Middleton Place and were greeted by bright sunny harsh light.  These are difficult conditions to photograph in due to the high contrast between the brightest parts and the darkest parts of the photo.
Not wanting to grumble out loud, I thought to myself "this is not going to be a very productive photography day".

The second day we met up with the Eastman Camera Club and went to Magnolia Plantation and Gardens.  Conditions were exactly the same and I'm thinking the same thing as the day before.  Why can't we have some clouds?

Shortly after we arrived one of our group reported they ran into Tony Sweet's wife and said Tony was there shooting.  Tony is one of the best nature photographers and instructors out there and here he was shooting in this terrible light!   At that point I decided I have no reason to grumble about bad light. As Darwin Wiggett said, I need to drop my expectations of ‘trophy’ light and accept the little gifts to be found in ‘bad’ light.  I was forgetting the fact that the Azaleas were at peak bloom and there was little to no wind.  A good friend was there the next weekend and the blooms had started to fall and he had to deal with the wind blowing the flowers around.

Later on I learned that Brenda Tharp was also at Magnolia Plantations that day.  Brenda wrote the very first photography book I bought and one I keep going back to. Two of the best nature photographers in the US were there shooting in the same conditions I was unhappy with.   Who was I to grumble about bad light?

Here's Tony's blog about that day.  Note there is not a word about "bad light" in his blog.
After getting over my mental roadblock I ended up having a good time at both places.   I looked for conditions where the light was not so harsh.   If a scene was evenly lit without deep shadows (Reflecting Pool) there are good photos to be made.  I looked for subjects that were in full shade (Azaleas and Spanish Moss).  If the scene had bright spots and dark shadows then HDR could be used to even out the light (Tree Lined Wall).


These few days around Charleston were a great lesson.  I need to remember to not let my "bad attitudes" get in the way and enjoy what God has created.

More photos from our trip to Charleston are available in the Charleston and Hilton Head folder.

The Importance of A Good Background Check

OK, I'm not saying call the FBI and have them check out the background of your friends.   I am suggesting that when you are composing your shot you need to be aware of the background.   Unless your subject fills the frame, the background could take up a larger portion of the photographic real estate than the subject.   It's important to make sure the background adds to the photo and does not take away from it.

When you're composing the shot think

Here's a few examples to illustrate what I'm saying


The two photos are of the same Great White Heron taken a second or two apart.  In the first the tree branches and twigs give a cluttered feel. The bright water behind the bird draws the viewers attention, which is not where I want them to look.  The leaves in the second are more uniform and less distracting.

OK, he doesn't have an arrow through his head but the cord running from the large wheel to the smaller one appears to go through his head. You may have to click on the image to see if full size to appreciate what I'm saying.  It would have been better if I had held the camera higher or moves a little to one side or the other and avoid this intersection.


The off white butterfly kind of gets lost in the first image. You can't help but look at the orange one in the second image.

Next time you're composing a shot take a second and do a background check.   You may be able to improve your image.
1 comment: Links to this post

Everybody Needs Beauty... The Calendar Chronicles for April

Its April 6 and I'm just now getting around to blogging about the calendar photo for April.   Spring has become a busy time and is about the get busier for June and I. I think the photo for April is appropriate for busy times. 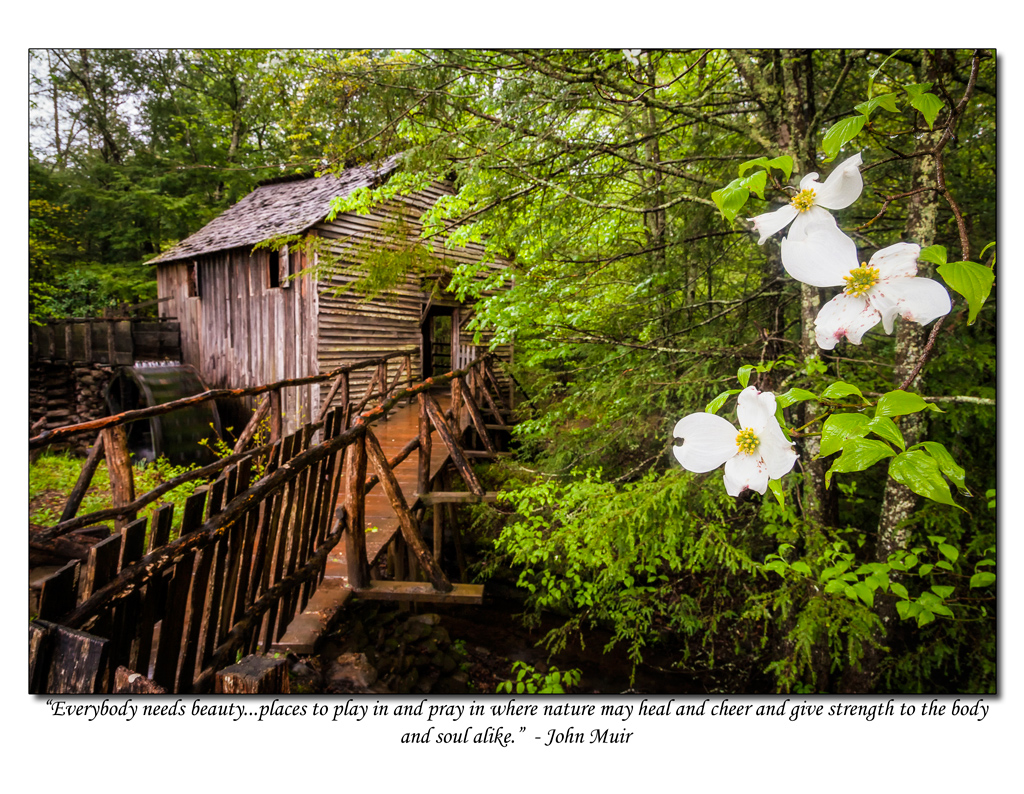 When I am busy and don't take time to slow down I miss out on what God has given me to enjoy in His creation.  Busyness also robes me in other ways.


"the worries of this life, the deceitfulness of wealth and the desires for other things come in and choke the word, making it unfruitful." - Mark 4:19

John Muir had it right.   We all need "places to play in and pray in where nature may heal and cheer and give strength to the body and soul alike."  We need to take time to slow down, turn off the pursuit of wealth and other things and spend time in His word and His presence.

This all sound great, but it can be difficult to accomplish when those other things are screaming for attention.  One sure fire way to get away is to go somewhere that does not have internet service, wifi, or cell phone service.  If I can't read my email, check facebook, listen to voice mails, or check in at work then the power of those things to be distractions is greatly diminished.

One of the best places to do this is Cades Cove in The Great Smoky Mountains National Park.  The subject of this photo is the Cable Mill in Cades Cove.   Everyone who has been to the cove has taken pictures of this mill and I have a pretty good collection of them myself.  The challenge for me the day I took this one was to come up with an image that is different from all my others and maybe even different from the million and one others out there on the internet.

The fact that it was raining made this photo possible.   The cloudy rainy conditions provided nice soft even light with no harsh shadows to deal with.  Normally on a spring day there would have been many people exploring inside and outside the mill.  On this day the rain kept them away and allowed me to compose this photo to include the bridge, see inside the mill and capture the Dogwood flowers.

During the next three plus busy weeks take a moment and think about what Muir had to say.  Slow down

"Adopt the pace of nature:  her secret is patience."  -Ralph Waldo Emerson