If you don't go, you'll never get the photo!

This past weekend I went with my friends in the Eastman Camera Club to Charleston SC for a long weekend of photography and friendship.   This was a great trip, even if the weather didn't cooperate.  On Sunday morning we got up way early to leave the hotel at 5:30 AM for sunrise at Folly Beach.   It started raining Saturday afternoon and had been raining ever since.   When we left the hotel it was raining pretty hard without much sign of clearing.   We kept telling ourselves, "if you don't go you'll never get the photo"   Not everyone agreed it was worth trying and only half our crew got up that morning.

When we reached the beach it was still raining but after about 15 minutes, the rain slowed down enough to get out of the cars.  At that point about 7 of use headed down the path toward the beach with no blue sky to be seen.  About 5 minutes later we walked out on the beach, the rain stopped, and the clouds started breaking up!  Our prayers were answered -- God blew the rain out and gave us a couple hours of shooting time.

Something I never saw growing up in Florida was a starfish on the beach.   This morning we saw two live ones and one that had spent too much time in the South Carolina sun.


This one reminded me of John Travolta in Saturday Night Fever.

The landmark on Folly Beach is the lighthouse that is just off shore.   The skies were still dull grey and cloudy and the lighthouse was a bit dull itself, which does not make for dramatic photos.   To make things a little more interesting I got low and shot the starfish with the lighthouse in the background.   The sand was very wet and I didn't want my camera in the sand and I didn't want to lay down in the sand to make the shot.   I ended up resting the camera on my wallet to keep it off the sand.

The wallet was my idea, but someone else suggested the composition.

Finally, the sun came out enough to give us some good low side light on the dead trees along the beach and the lighthouse offshore.


My friends came away with several good photos from Sunday morning.  If we had stayed in bed or went back to bed when it was raining, we never would have gotten any shots of Folly Beach.   Sometimes you have to get up at completely unreasonable times, drive with no promise of good light or even good weather, and pray that you will find something worthily of shooting.   There are no guarantees, expect "if you don't go, you'll never get the photo".
1 comment:

This pair of Blue Winged Teal look like they are heading out for a night on the town.

This was taken at Green KayWetlands in Florida.   The only access to the wetlands is via an elevated boardwalk, which means you are constantly looking down on the birds in the water.   Taking photos from this angle produces an unnatural perspective, like this photo of a Pied-Billed Grebe
When shooting wildlife you want to get down to their level if possible.  To get the Blue Winged Teal shot I got down low shooting between the slats in the boardwalk rail.   This gave the photo a more natural and interesting perspective.  If I could I would have gotten even lower, but my angle was limited.
More photos from the wetlands are available in the Florida gallery.
No comments:

I'm making my way through the 1,200 photos from the Florida wetlands earlier this week.  I'm now down to 300, which means the other 900 weren't worth the bits on the disk.   I'm not through yet, but I've made good progress.
I thought I would follow up the last post with some more photos of Great Egrets.   As you can see, in addition to being beautiful creatures, Great Egrets are
﻿
﻿


We were blessed with beautiful mornings with magnificent birds.  What a great opportunity to enjoy creation.   I hope you enjoy these photos.  Be sure to click on the images for a larger view.


More photos from the wetlands are available in the Florida gallery.
1 comment:

Just Back From West Palm Beach and The Wakodahatchee Wetlands

We spent a few days visiting family in West Palm Beach this week.  I got out shooting three mornings while there - once to Green Cay Wetlands in Boyton Beach and twice to Wakadahatchee Wetlands in Delray Beach.  These are both great places to photograph birds in a natural habitat.   Green Cay is a nicer facility with a 1.5 mile elevated boardwalk and a Nature Center but Wakadahatchee is by far the best place for photographing the birds.   I've been three years in a row now and highly recommend both.

I took over 1,200 images the three mornings and now have to process through those to narrow down to the few keepers.   It will take several days to get through but I'll eventually post them in my online gallery.  For now, here's one of a Great Egret at Wakadahatchee. This bird was in breeding plumage wtih delicate ornamental feathers on it's back and the green skin around it's eyes. 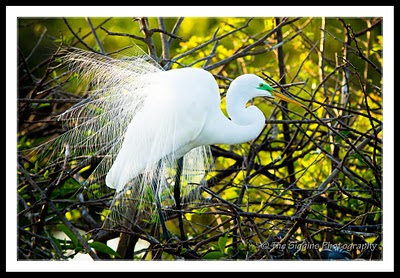 Great Egret at Wakadahatchee Wetlands
1/400 sec, f/5.6, 250mm
Click the photo for a larger version.
More photos from the wetlands are availale in the Florida Gallery.
No comments:

Last month my family bought me a new hot shoe flash for my birthday.   I had one of those plastic diffusers to put on the front of my old flash, but of course it didn't fit the new flash.   Instead of getting another diffuser I decided to try something new -- The Rogue Flash Bender.  The old diffuser did fine for softening some of the harsh flash shadows but this neat little toy does a lot more. 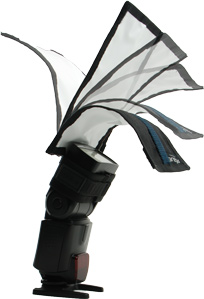 The FlashBender, which comes in small, medium and large sizes, is made of an optically neutral reflective fabric backed by Cordura Nylon and a material that helps it keeps whatever shape you manipulate it to take. It has an elastic strap that wraps around the top of the flash and attaches with Velcro. 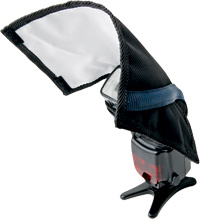 A backing material allows you to mold and shape the light so you can have anything from a flat reflector to a snoot.  You have many options for shaping the light from the flash.  Once you’ve manipulated the material, it holds its place.
I've done a few test shots with it set up as a reflector and it does a great job on the shadows.   Recently, I used it as a snoot outdoors on bright sunny days.
The snoot shape focuses all the light from the flash into a narrower beam of light over a longer distance.   It's not as effective as something like a Better Beamer, but it's much more "flexible"  (pun intended).   The first time I used it was at a Revolutionary War Reenactment.   It was a bright sunny day, which put anyone with a hat on in dark shadows.   With the snoot I was able to light people's faces under their hat, sometimes from 30 feet away or more. 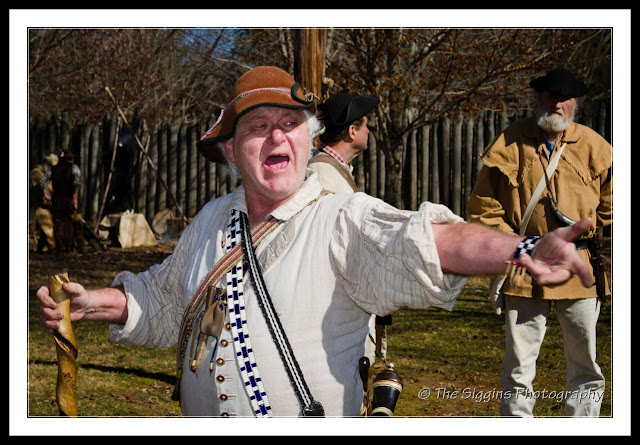 Compare this man's face with that of the man on the right side.   The man's face on the right is completely black but the man in the center is well lit.  I think this was taken about from about 20 feet away. 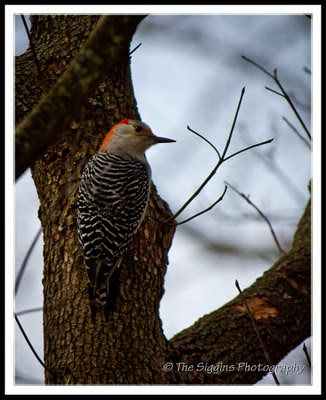 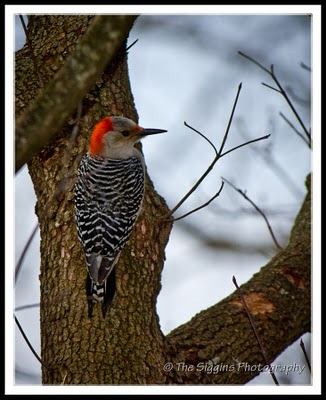 The second time I used the snoot arrangement was taking bird pictures.   This woodpecker would land on the same branch, which was probably 30 feet away but in the shadows.   The first shot was without a flash.   In the second shot I used the snoot to focus the light on the bird.  Both shots were taken with a 400mm telephoto lens on a Canon 7D camera, which gave it an effective focal length of 640mm.  Instead of using the flash I could have bumped up the exposure compensation, but that would have showed my shutter speed, changed the depth of field, or if I increased the ISO introduced more noise in the picture.
The Flash Bender folds up flat and fits easily in my camera bag.   It's versatile and effective.   It's now one of my favorite "Camera Toys".
I bought mine from Adorama but they are carried by a number of different places.
No comments: